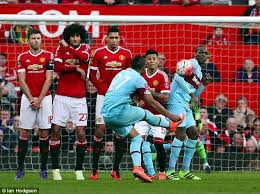 Ex asked me to write an article and I thought why not discuss goal of the season, but we scored so many great and emotional and important goals, my shortlist had over twenty and I would never be able to whittle down the list. Set piece goals v open play goals? Still a dozen in each! So I’ve bottled it and decided to choose between the 6 free-kicks.

My second confession is that I don’t want to let go of last season. It was brilliant and it was fun and it was emotional and it reinforced my pride as a hammer. Unfortunately, having supported West Ham since the 70’s, a little part of me is scared that this euphoria won’t last. Next season despite European football and a shiny new stadium, knowing West Ham, it could just as easily be an anti-climactic battle against relegation. So for a few more days, until we get well into the Euros and excited or nonplussed by our transfer business, I’m clinging onto last season, please indulge me!

Payet has been the obvious star of the show this season. Flair, skill, verve, audacity, he has demonstrated it all this season. And he hasn’t finished, he’s followed up that superb free kick against Russia with an equally improbable one against Cameroon and all of a sudden he’s France’s golden boy, their new Zidane (we told you so!)

His free kicks in the second half of the season became mini-events in themselves. There was an expectation that he would score that I don’t remember with any West Ham player since Liam Brady!

But, I don’t think he scored our best free kick this season.

Payet’s free kicks against Bournemouth and Blackburn were sheer perfection. His run up, the way he hit the ball, the distance from goal, all of it, just perfect, textbook free kicks.

The Man Utd free kick is right up there. As well as the speed and the accuracy, the balls to try from distance against one of the world’s best, De Gea. It reminds me of Gascoigne against Arsenal’s Seaman in the FA Cup semi-final back in 1991. Not Payet’s fault, but you know deep down that the keeper should have saved it.

The thing about all of these free kicks, is that they are two a penny in the Premier League. You regularly see similar goals, just not regularly from the same players! If you were to teach kids to take free kicks, that style is what you would teach them. Hit it with the inside of the foot, get it over the wall and curl it into the corner.

The Palace goal is where it starts to get interesting. 8 Palace players in the wall? Not just curl, but dip as well and it went in right next to their keeper who was comically flat footed. That for me is Payet’s best free kick for West Ham last season.

But not West Ham’s best last season, no siree.

Remember Zarate, that Messi wannabe who dribbled constantly into cul-de-sacs and couldn’t get into QPRs relegated team? He was on fire at the start of the season. Remember his goal against Arsenal, or that thunderbolt against Chelsea? He also scored a sumptuous free kick against West Brom. No run-up. He just stepped up and BANG! The ball went over the wall, the trajectory plateaued and it arrowed into the top corner. Pace, power and precision. What makes it all the more impressive is how close it was to the goal. It’s a really difficult skill to lift the ball and maintain power whilst getting it on target. Watch it again. It is special.

Bournemouth, 12 January 2016. West Ham are winning 2-1 after being a goal down. We’ve already seen Payet hit the perfect free kick. Up steps Enner. We know what he will do. He will blast the ball either straight into the wall or row z. There is no other option.

I cannot describe what Valencia did next. I don’t know how you would teach kids to do what he did or whether you would even try. He approached the ball from the wrong angle, he hits his shot with the top of his foot and the ball rises towards row z and then as if it has a mind of its own it swerves and dips into the top corner of the near post where the goal keeper despite starting on that side doesn’t have a chance. I haven’t seen another free kick like that all season in fact, ever. Christiano Ronaldo is known to hit free kicks in a similar fashion, but even when scores, it is more about the sheer power and the movement that the technique creates, not the accuracy. Look again at Enner’s run up. There is nowhere else that he could have been aiming for, he meant it. He pulled off a peach and I just don’t understand why he hasn’t been given the credit he deserves.

Even if he goes this summer, he has scored two memorable and utterly unique goals. The blast with no back lift and none of the goal to aim for against Hull and the best free kick in an amazing season of free kicks for West Ham.

Disagree? Leave a comment or pop in and see me at Planet-Leasing, happy to have a chat about cars, vans or West Ham!