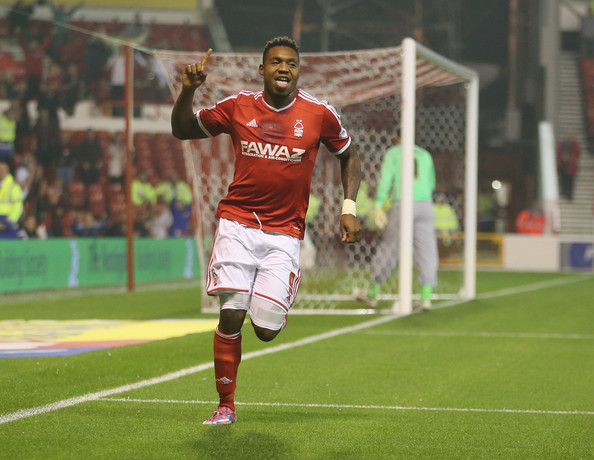 Brian Knox
2 comments
Britt Assombalonga
Age: 23 years
Nationality: English
Current Team: Nottingham Forest
This week we have a striker who lives for scoring goals!
Britt Assombalonga is a striker who scores all different types of goals.
Long shots, left foot and right foot shots combined with good power and technique.
I really like what he offers teams on the pitch.
A very well-rounded striker, his only major weakness is aerial duels.
However he is still capable of scoring with his head in the box, he just won’t be much use if he has balls lobbed up to him while being used as a targetman.
He is a poacher who will run off defences looking for the key pass.
He is not very tall at 5’10”, but has enough strength, balance and movement to win headers from crosses.
He is pacey and has deceptive strength.
Very good off the ball work rate, will chase direct balls and be a nightmare with his movement for defences.
Britt is comfortable on the ball, can dribble at pace and shifts the ball well to shoot.
He is clever at finding space and is a natural finisher.
Very alert in the box, if there’s a loose ball he’s usually one of the first to react and score.
His determination to score goals makes him an even bigger threat, and in addition his anticipation and his ability combine well.
West Ham’s very own Antonio linked up well with Assombalonga at Forest just before he left.
Unfortunately the bad injury he suffered last season may mean it takes him a while to get back to peak fitness.
I would think clubs will wait to see if he fully recovers first before having a serious look at him.
Overall I believe Britt Assombalonga would be a great buy and does what is required of strikers….he scores goals.
Written by Richard Jones – via twitter @emagehtjr
STRENGTHS :  Finishing – Movement – Anticipation – Pace – Dribbling
WEAKNESSES : Aerial duels
share