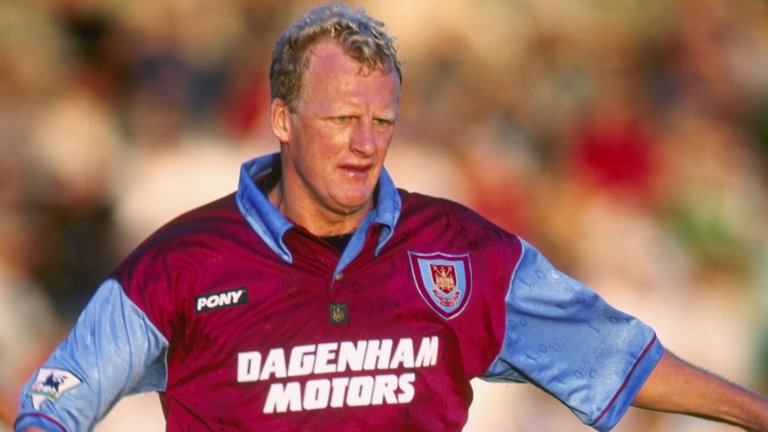 Hughes and Cantona, Sutton and Shearer, Bergkamp and Anelka, England’s top tier was blessed with some devastating duos during the Nineties.

United had power and poise, Arsenal had artistry and acceleration. Yet it was West Ham who provided the most unique forward line of all. For when Portuguese starlet Dani met Iain Dowie in 1996, it was truly the Premier League’s version of Beauty and the Beast.

Dani was tipped for stardom after starring in the 1995 FIFA World Youth Championship. He had a left foot that could rewire a television and he also brought something else the Hammers were severely lacking: the Portuguese was an absolute stunner.

With his Johnny Depp hair, puppy dog eyes, high cheekbones and a smile that could melt the heart of both man and beast, Dani sexed up a West Ham forward line that made unattractive viewing.

Whilst peacocks like Klinsmann, Cantona and Ginola were strutting their stuff around Premier League stadia, Upton Park was stuck with Iain Dowie, the top tier’s version of the ugly duckling. The Northern Irishman’s ample perspiration wasn’t matched by precision in front of goal. He’d contributed just six goals in a season where the team had struggled to score frequently.

The arrival of Dani was meant to help solve the Hammers’ striking problems. And Redknapp wasted no time in shoving him in for a debut at Tottenham.

The youngster couldn’t have wished for a more fairytale start. Four minutes into his rain-soaked debut, he nodded past Ian Walker and gave his new club the lead against their arch-rivals.

Whilst Dowie ran hard and jumped high, Dani brought some calm to the chaos of a full-blooded London derby. A wiggle of the hips frequently left his marker for dead. The hardcores in the away end swooned with delight.

The hosts stepped up a gear after the break. The West Ham defence, which so often crumbled under pressure, held firm. Debutant Bilic was magnificent. Miklosko kept Armstrong, Dozzell and Sheringham at bay.

Eventually Tottenham tired, as did the Portuguese heartthrob who was afforded a standing ovation. His early goal was enough to send three precious points eastbound.

Afterwards the dynamic duo was interviewed by the Sky Sports cameras. Glistening with sweat and sporting that Hollywood smile, Dani was every inch the dreamboat. Dowie was the canal barge chugging alongside him. West Ham fans wondered whether this unlikely duo could guide their team away from the choppy waters of the relegation zone.

Never mind the football pitch, Dani’s magical hips soon became the talk of the dancefloor. Though his command of English was weak, his love of the universal language was strong. His looks alone found him many openings in London’s late-night hotspots.

Mixing the energy-sapping demands of his female admirers and the Premier League was too much for such young legs. Frequently late for training, arriving with his trousers wrapped round his ankles, he soon fell foul of Redknapp’s temper.

He signed off with a sweet strike in a 4-2 home win over Manchester City. Dowie scored two that day. It was a fitting end to the affair.

By this time Dowie had no delusions over his strike partner’s fidelity. The papers, revelling in the opportunity for salacious gossip, linked the young Portuguese with everyone from Louise Nurding (Jamie Redknapp’s future wife) to Kylie Minogue.

It was a hammer blow to the big man’s confidence.

Dani was shipped off to Holland where he spent four inconsistent seasons with Ajax. His career fizzled out and he retired from football at the tender age of 27.

Years later he graced the dancefloor again, as host of Portugal’s version of Strictly Come Dancing. Those hips would not be denied.

As for Dowie, he entered a period of mourning following the departure of his fresh-faced friend. For the next sixteen games he moped around the field to little effect, barely mustering a shot on target.

Sensing the monster’s malaise, Redknapp pulled off a managerial masterstroke. He introduced Big Iain to Hugo Porfirio, another fleet-footed forward from Portugal. The rejuvenated target man scored twice as Forest were thrashed 4-1 in the League Cup third round.

There would be no romantic end to this story either.

Homesick Hugo headed to Spain in the summer. His strike partner was crestfallen. The Northern Ireland man failed to score in a staggering thirty-two further appearances for the club, cementing his status as one of the worst Upton Park had ever seen.

Like the tale of Dani and Dowie, it had been another brief encounter.