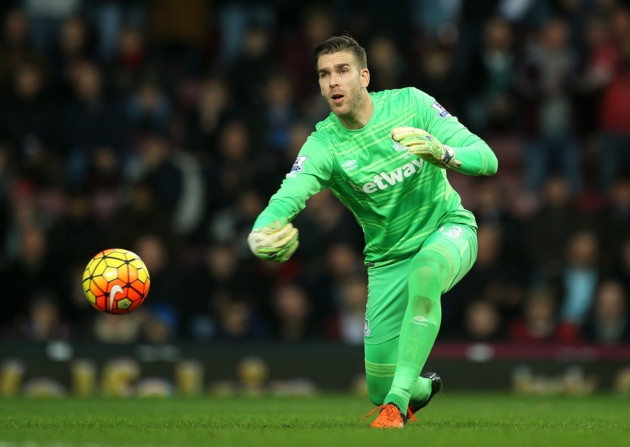 Adrian has become, I think it’s safe to say, a bit of a cult hero among West Ham fans. He is fiery, passionate and talented. But… Is his passion getting the better of him? He has always been a little dramatic, but he seems to be taking it to a whole new level as each season passes. Now instead of feeling confident when a ball is lobbed into the box, you can’t help but lift your bum off the seat just a little. Speak for yourselves, but personally I often find myself thinking things like: “Is he going to try and superman punch a floating ball he easily could catch?”, or, “Is he going to flap at the ball and miss it completely?”. On top of this, I haven’t even mentioned his keepy-uppies last season, and his taking ages to kick the ball in open play, resulting in a few heart in mouth moments!

To me, the goal looked a lot smaller when Darren Randolph was between the sticks last season. Which is ironic considering the stick he got from our fans last pre-season. Randolph may be a bit more orthodox, but he seems a lot more solid when it comes to the basics; but, he also, has proved he can pull off a cracking diving save when needed. For me, this is why I prefer Randolph to Adrian… “He can pull off a cracking save WHEN NEEDED!”. Whereas Adrian seems to pull off diving saves even when they aren’t needed.

Now, it is important that I-or maybe even we-don’t run away with this too early. Adrian is a class keeper, and-in my humble opinion-was one of the most underrated keeper’s in the League during the 14/15 season. However, last season I was simply disappointed with him, and the root of his sketchy form seemed to growing from he melodramatic antics.

Some fans are already calling for us to sign a new keeper. However, at this moment in time, that shouldn’t be a priority. But, if we are still strong in all positions at the end of the season, and Adrian does not impress, I think we should splash big on a top-class keeper. Hopefully Adrian has realised he needs to crack down now, if he wishes to earn back the trust of the fans. But, he also needs to impress the gaffer too… We all know Bilic will hold no prisoners when it comes to putting out the best starting 11 he can.