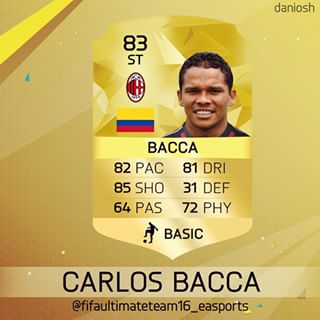 My nine year old son has been playing FIFA for a few years now. One of his favourite players in the game is Carlos Bacca. Why? Because on the game, he’s labelled as C .Bacca. Now my son is a Star Wars fan, as well as a Hammer, and he loves to call him Chewbacca. When I mentioned to him that there were rumours that we may be buying him – he literally danced for joy.

Ah, the innocence of youth.

Now that Bacca is stalling on signing a deal, I don’t want to (terrible pun alert) burst his bubble and crush his dreams just yet – until we know the outcome of this saga. So I’m holding off from telling him anything until Ex gives us confirmation of a deal.

Now this isn’t the first time in this window that we’ve been heavily linked with some really good strikers. Lacazette and Batshuayi set the rumour mill alight before the Euro’s and we all know what happened there.

A cynic would suggest that both of these players, or more probably their agents, were likely using us as a way to drive up interest from other clubs. Now, I seriously doubt that either player had any real interest in joining. Our ambition is high and the club is moving in a very positive direction under the stewardship of the joint-chairman.  But the fact is, we are not yet playing in the Champions League and most of the high quality players we are being linked with want immediate access to Europe’s premier competition.

The only way we are likely to get these types of players in to the club is by spending vast amounts of money on transfer fees and salaries.

Don’t forget clubs around the world want to cash in on the vast riches on offer from Premiership teams this season with seemingly average players fees hugely inflated. Players agents are looking for obscenely high wages for their clients – and they will destroy our club’s current wage structure.

Our joint-chairman and indeed Lady Brady are working hard to get the club back on a solid financial footing after years of mis-management. Do we really want to go through those bleak years again?

Now this is where I go back to the Bacca situation. I’m sure the club could secure his signature if we paid him enough money, but is it worth it at the risk of losing our all-important team morale? Bear in mind, this team fights for each other. I’m no longer fearful of going a goal down – we can get back into games. Over the years, that hasn’t always been the case – trust me.

Personally, and I welcome your thoughts on this, I’d rather see players join that are as passionate and excited about joining us as we, the fans are about supporting out our team.

Don’t forget, Payet wasn’t seen as worldie when he joined us. Bilic has installed a belief in him and the team around him. We play to his obvious strengths. He, and indeed we, are reaping the benefits. The same could be said of Di Canio. He was seen as a maverick, a real punt at the time but we, the supporters, got behind him and earned his loyalty. What a player he turned out to be for us.

My point, you may be asking?

You need a player in the Premiership that is going to show both quality and a desire to do well for their club. These two qualities aren’t mutually exclusive. For a club with our level of ambition, I really think we need both.

Just look at some of the fantastic signings we’ve had over the years who have failed to live up to their promise. We’ve had Javier Mascherano who didn’t really get a kick, Davor Suker, Benni McCarthy, Kieron Dyer and Florin Raducioiu. The reason they flattered to deceive? They all wanted a big pay day or used us as a stepping stone.

So my hope is that we don’t get held to ransom by greedy clubs or greedy players. Instead, we bring in players who are excited about playing in front of 60,000 passionate fans every week and will give us their heart and soul. In return, we’ll give them a chant and plenty of adoration. Who could turn that down eh?

So, whether Bacca is in or out is down to him. The important question is – will he turn out to be my son’s ultimate footballing hero, or deal him the first crushing blow of his early life?

Now, if you’ll excuse me, I’m off to tell my boy about the rumour we’re signing James Rodriguez……