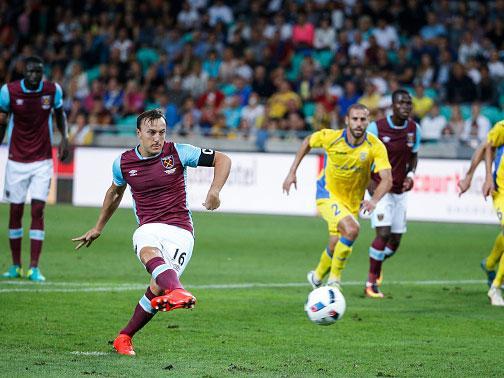 West Ham’s European Away woes continued this evening as they were beaten 2-1 in Ljubljana by NK Domzale, which means the club have now lost their last three European ties away from home.

Their fate could’ve been even worse if it wasn’t for a spectacular double save near the end of the game by Adrian to keep the scoreline at 2-1.

Matic Crnic put the hosts ahead from the spot after the referee awarded a debatable penalty when the ball struck Havard Nordtveit’s arm and then he grabbed the winner with a fine solo goal when Michail Antonio was caught well out of position in the second half.

Mark Noble converted the Hammer’s spot kick  awarded for a foul by the goalkeeper on Winston Reid.

The Hammers went into the game with a strong line-up including Adrian in goal.

The back four consisted of Michail Antonio and Sam Byram at fullback, Winston Reid and Norwegian International Havard Nordtveit at centreback.  Captain Mark Noble anchored the midfield with Cheikh Kouyate and Pedro Obiang. Sofiane Feghouli started on the right wing with Enner Valencia on the left and Andy Carroll up front.

Gokhan Tore missed the game after suffering a knock in training last night and the Hammers were also without their three Euro 2016 players, Payet, Collins and Ogbonna plus the injured Cresswell and Lanzini.

Slaven Bilic had to watch the game from the stands as he was serving a suspension for his sending off against FC Astra last year when the Hammers were eliminated from the Europa League.

Although the Hammers are still in a strong position to qualify, many of the faithful will be concerned by this performance when a team consisting of all first team squad players struggled to break down Domzale and looked so weak at the back on the counter attack.  They will also be frustrated with the Manager’s continual insistence to play Michail Antonio at right back.

Only time will tell if the Manager will change his stance on Antonio but rest assured if the past is anything to go by West Ham never produce two poor performances in a row so they should be well prepared for the second leg to open their new Stadium next Thursday.