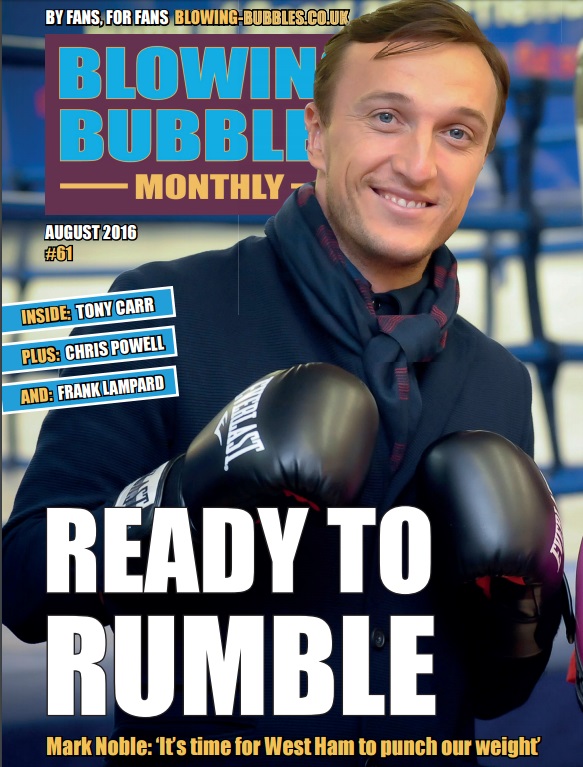 Blowing Bubbles will be giving away 10,000 copies of their August issue to celebrate the start of a new chapter in West Ham’s history.

The move by the monthly magazine, entering its fifth season of publication, comes after OLAS and Ex Hammers Magazine announced they had ceased publication. August’s issue is aimed at giving those attending the Juventus and Bournemouth games something to remember this historic month by.

Not going to either game? You can secure your copy at a reduced price here > www.blowing-bubbles.co.uk/subscribe.html

Editor David Blackmore urged any West Ham fans interested in being paid to distribute August’s issue to get touch via editor@blowing-bubbles.co.uk. He also thanked businesses in and around Stratford for enabling the magazine, usually priced at £3, to mark this exciting new month for West Ham.

Blowing Bubbles’ base for the Juventus game, he continued, will be the Cow in Westfield but he stressed distributors would also be dotted around in the limited, designated areas available to his magazine.

“I’m delighted that we are able to hand out thousands of copies to give people a memento to cherish from the first games at our new home,” David said. “Never have I been as proud, worked so hard, or been as worried as I have over this first issue of the season.

“There has been so much love from the West Ham family over the past few months with our Farewell Boleyn commemorative issue and Summer Annual – long may this continue.

“I hope those reading Blowing Bubbles for the first time enjoy their first taste of our writers’ carefully crafted words, and I hope they want to continue to support what we do by picking up a copy every month.”

David confirmed the magazine would increase its presence outside our new home, but added: “If you can’t get to every game, make sure you don’t miss out by securing a subscription on our website. Then, while you’re online, follow us on Twitter and like our Facebook page.”

You can secure your subscription for the 2016/17 season here > www.blowing-bubbles.co.uk/subscribe.html