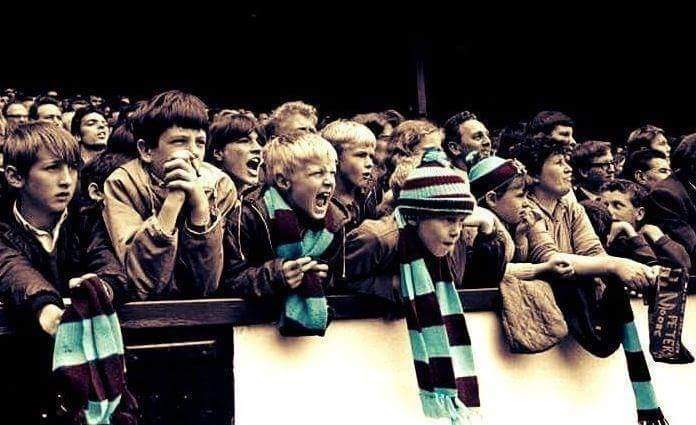 This article was written by Ian Barnard (@onebarian1)

I was jotting down some ideas for an article when an excellent piece written by Joe Doran was posted on this site. He seemed to sum up the state of flux as regards the current transfer activity perfectly and succinctly put things into perspective. However more than that, Joe’s article underlined how technology, football, and moreover our beloved Hammers have changed. Such are the modern day expectations of supporters. Cue a very brief history lesson during my lifetime.

I’m old enough to have seen the late great Bobby Moore play when my father took me to our old home when I was a young lad. Without stating the obvious, the world we live in now is an entirely different place. Back then the club was owned by the long standing Cearns family. There was no shirt sponsorship, not even a manufacturer’s logo. Betting was something you did on horses and greyhounds, the forerunner of a scoreboard were the letters A-L sited at two corners of the ground which displayed the first division half time results by means of an old boy hanging numbers against each letter (similar to a cricket scoreboard).  The team had one whole substitute, shin guards were an optional extra and the smell of tobacco was the norm. These were simple times when mobile phones consisted of strategically placed red boxes with a door and a phone inside. Simple computers were the size of a house and worked with bits of card with holes punched in them and Twitter was something only birds did.  As supporters we had no interaction with the club or indeed fellow supporters outside of those we met socially. It literally was a case of turning up to watch our heroes of the day and being reliant upon a small column in the local Recorder newspaper each Thursday, which then eventually progressed to a whole ‘West Ham page’…wow!

As the years rolled by so things changed, and little by little so did our expectations. The 80s saw AVCO kick off shirt sponsorship deals on the front, which led to player’s names on the back. The increased revenue from both the sponsors and from the growing market in replica kit was already having a financially positive effect. Transfers were becoming more common place and the thirst for fan information was set. So to the 90s when the transition really started to gather pace. Although still under the ownership of the Cearns dynasty, one Terence Brown took the reins and even though he was vilified, primarily due to the failed bond scheme, he oversaw the redevelopment of the north and south banks and the west stand between 1993 and 2001, this in no small part due to the technological revolution that was just about to explode and the finances that went with it. Enter the Premier League.

In 1993 the Premier league was born. A platform that would change the face of football as we knew it. The access this gave to managers and players via Sky’s coverage was unrivalled, and with it came Super Sundays and Monday night football, yes football on a Monday! Seriously detailed analysis, and of course a significant TV driven income stream. The old ‘Big Match’ on a Sunday was immediately history as live matches became the norm. At the same time in the mid 90s, this thing called the Internet was starting to germinate. Little did we know the impact it was to have on our everyday lives, particularly with social media just over a decade away, and how we as supporters would interact with each other, and our club.

As we all know the West Ham road has never been a straight one and there were a couple of further bends to negotiate. 2006 saw the Cearns sell up, the dollar signs were huge in the eyes of Bjorgolfur Gudmundsson who waded in with his biscuit riches to supposedly elevate us beyond our wildest dreams. Partially due to woeful mismanagement, and the Icelandic banking collapse, we all know where that ended up, with our beloved club literally staring into the abyss as administration loomed. At the same time the internet was now well and truly with us and as supporters we were feeding off  web pages filled with information from a myriad of sources that could be searched from the comfort of our own homes. Those mere morsels of communication from yesteryear had been replaced with information overload as the keyboard warriors sought answers to the perilous state we were in. Add the fact that summers and Januarys had now become times when transfer windows dominated our thoughts, the thirst for news of every facet of our club had been ramped up to another level.

Our saviours rode to our rescue in 2010. Given the history of our proud club they’ve literally been here five minutes and yet look at what has been achieved. Through careful management and shrewd business acumen they have steered us through rough seas, then choppy waters to the relative serenity of where we are now. Without them we could easily be another Portsmouth, having a great fan base but playing in the lower leagues a world away from the stadium and squad we’ve got to look forward to this season. During their tenure we’ve again seen technology move forward with mobile communications now part and parcel of everyday life. We have the ability to literally wake, up roll over and start accessing all things West Ham. We are also lucky to have owners and their offspring who take to social media and make themselves readily available. We have one of the most reliable ITKs in the country (Take a bow Mr Ex), a stadium the envy of most other clubs, and a manager and squad who, let’s face it, three years ago we could only aspire to. Yes, Sky and its tailspin of wealth has helped fuel our dreams, but the most significant milestone by far was the purchase of our club by Gold and Sullivan.

It pains me when I see people who clearly have hard skin on the backs of their knuckles, or share a solitary brain cell with someone else, take to social media to abuse the likes of Mr Gold, Mr Sullivan’s boys or even Ex for his information sharing exploits. Is it more a sign of the times that we’ve now got access to the decision makers and those who are legitimately informed of what’s going on? Would we really like it if we became more akin to just about every other club going where the board remain untouchable or a board without the aspirations of DS & DG? Would we really like it if nothing was said about the desire for a top-drawer striker?

Perhaps the old adage of a little knowledge being dangerous is in some way true. We don’t know the stresses Mr Sullivan goes through on a daily basis trying to secure the best deals for our club, dealing with agents who have more of a vested interest in themselves than those they represent, clubs who clearly want to levy extortionate sums on the heads of their stars and not forgetting the actual pawns in the transfer chess game. And yet because we haven’t wandered around with an open cheque book saying, “we’ve got a lovely new stadium sign on the dotted line son” to any of the world’s top players, it’s simply not good enough for many. Twitter is a classic example, it makes the board accessible and provides a platform to express our heartfelt views to the masses, regardless if anyone has the facts or not.

There’s a quote, “It’s not how good you are, it’s how good you want to be…” and clearly the club’s expectations are to be challenging for those Champions League places.  Sadly the ‘drive through’ era in which we live demands instantaneous action in every respect, so perhaps it’s a good time to take stock. From a personal perspective, a quick look back over the last 40 years both at the club, and the high tech world that we now live in certainly makes me appreciative of the wonderful health of my beloved West Ham. I for one won’t take for granted the privilege of now being able to share information 24/7 – 365 days a year, or indeed to be able to convey my thoughts directly to the owners of our club.