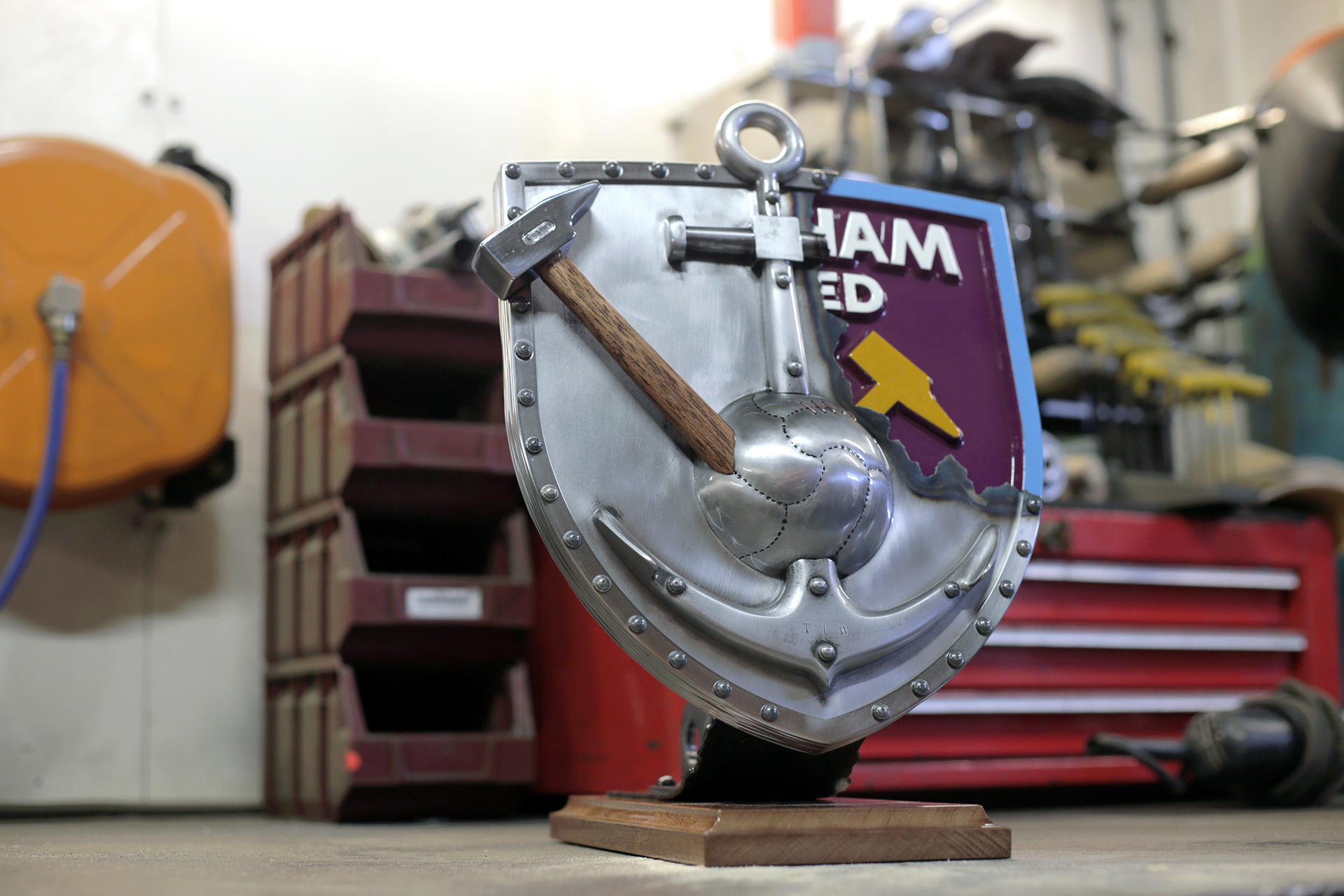 Russ Williams was raised on Boleyn Road and learned the trade of metalwork at his dad’s firm in Stratford.

The lifelong West Ham United supporter, then, was the perfect person to design and create the Betway Cup Man of the Match trophy – a fixture which celebrates the club’s exciting future, but also their esteemed history.

And like the all-blue commemorative strip that Slaven Bilic’s players will wear against Juventus on Sunday, the trophy is inspired by the Thames Ironworks and company owner Arnold Hills.

“To be approached was a great honour,” says Russ, 56, in the thick Cockney accent he has retained despite moving away from the East End – first to Hertfordshire, and then to Essex – as a teenager.

“It didn’t take me long to actually decide the way I was going to make it.

“When you think of the Thames Ironworks, you immediately think of ships and bridges. In them days, everything was made of plate and rivets.

“They didn’t have the technology like they have now. And me, personally, I think the way metalwork was made then was fantastic.”

Russ headed to his workshop and rewound time, crafting the trophy as if he was a worker in the 1880s, someone “who started making it in his dinner hour with what resources he had, which wasn’t a lot, really”.

There were other things to consider, like how to emphasise the connection between the Thames Ironworks and West Ham’s new crest.

“The shape of the new badge is the bowl of the HMS Warrior,” says Russ. “So I thought we’ll peel back the design of the Thames Ironworks badge and show the new badge.”

The trophy is a little rustic in places, which is in keeping with Russ’ vision.

“One of the things I’ve tried my hardest to do is to make the actual Thames Ironwork shield part of it look old, as if it was made all them years ago,” he says.

So even though Sunday’s game for the two teams is more about preparation than points, it is of immense importance to the craftsmen whose idol was, and still is, a certain iconic number six-wearing defender.

“I am a true West Ham boy,” says Russ. “As a kid I used to get my dad to drive me past Bobby Moore’s house in Chigwell. He had this beautiful mansion.”

And while the players have changed over the generations, the bond that exists between a father, his son and their football team has remained.

“When I had my two boys, one of the most important things was that they supported West Ham,” says Russ. “I started taking them to the Boleyn Ground and eventually we got season tickets.”

Mitchell and Miles have been ardent supporters ever since. Well, almost.

“When we got relegated in 2003, which wasn’t a nice thing, my youngest son came to me and said: ‘Dad, can you buy me a Chelsea kit?’

Russ pauses, looking as unimpressed now as he was 13 years ago.

“You can imagine my answer,” he says.

Too right. As Russ presumably explained to Miles at the time, following your club is never just about one moment in time.

It is about where it is going, of course, but also where it has come from.

Which is what makes the treasure Russ has made so special.

“I hope this trophy helps to keep the club’s history and roots alive,” he says. “And long may that continue at the new stadium.”