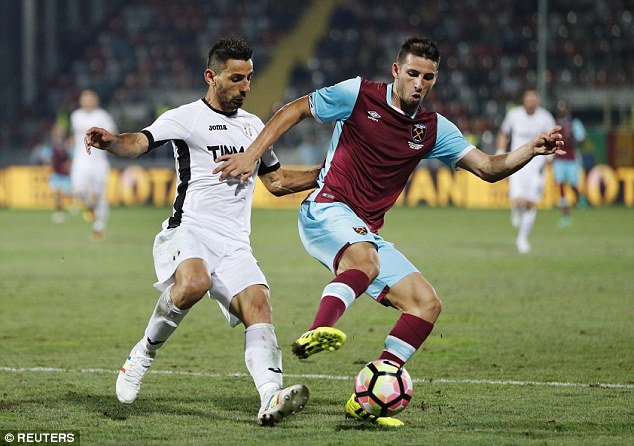 Brian Knox
Romanian International striker, Denis Alibec came off the bench and netted a late equaliser as the Hammers had to settle for a 1-1 draw in the first leg of the UEFA Europa League play-off round in Romania.

Slaven Bilic’s side looked to have gained an important away-goal advantage after Mark Noble’s penalty on the stroke of half-time put them ahead in the tie.

But having beaten the Hammers in the same competition last season, the Romanian champions showed the weaknesses in the West Ham defence once again and there is now plenty to play for as both sides prepare for the second leg at London Stadium next Thursday.

Bilic was missing a number of key players heading into the tie, including the injured Cresswell, Ayew, Lanzini, Payet, Feghouli, Nordtveit and the cup-tied Masuaku but he still managed to name a strong line-up and the visitors dominated the opening exchanges.

It was almost a dream start for new signing Jonathan Calleri, who was making his debut for the Hammers. Noble’s cross fell perfectly for the Argentine forward, who saw his close-range header produce a fine save from Romania international goalkeeper Silviu Lung. West Ham came close again on 12 minutes when Gokhan Tore’s corner picked out Michail Antonio, who saw his powerful header cleared off the line by Filipe Teixeira.

Astra Giurgiu, who came away with a 2-1 victory in Romania last season to complete a 4-3 aggregate win, created their first major opening on 15 minutes when Alexandru Ionita weaved his way into the box and fired a low shot which produced a fine save from Darren Randolph diving low to his right. As the game ebbed and flowed towards half-time, Tore turned provider once again on 40 minutes when his corner fell perfectly for Reece Burke, but his downward header produced another superb save from Lung.

The Hammers finally found a breakthrough when they took the lead on the stroke of half-time after Cristian Sapunaru handled the ball inside the area. Artur Dias had no hesitation in pointing to the spot and Noble kept his nerve once again to fire the penalty into the back of the net. The Captain’s 28th successful spot-kick out of 31.

After the break, with West Ham showing signs of tiring after a Monday visit to Chelsea and long journey to Giurgiu, the home side pressed for an equaliser and came close on 66 minutes when Junior Morais raced towards the box and drilled a shot inches over the bar. Substitute Alibec, another Romania international who saw his Euro 2016 campaign cut short by injury, also saw a low shot easily saved by Randolph on 71 minutes.

The Hammers should have put the game beyond their counterparts on 81 minutes when substitute Marcus Browne showed a great piece of skill to burst clear of the defence and only had the ‘keeper to beat.

But he unselfishly squared the ball to Antonio, but he fired the ball into the side netting.

West Ham were made to pay as the Romanian Champions drew level on 83 minutes when the ball fell to Alibec from a corner. The burly No10 made no mistake, spinning past James Collins and striking his close-range effort into the roof of the net to push the tie wide open.

Bilic will no doubt be pleased with some of the performances out there tonight including Reece Burke playing out of position at left-back, Michail Antonio back to his dangerous looking self in a left sided midfield role and Jonathan Calleri mixing it up on his debut but I’m sure he’ll want to see a lot more from an unfit looking Gokhan Tore, Pedro Obiang and Sam Byram who had a troubled night at right back in first competitive start there this season.