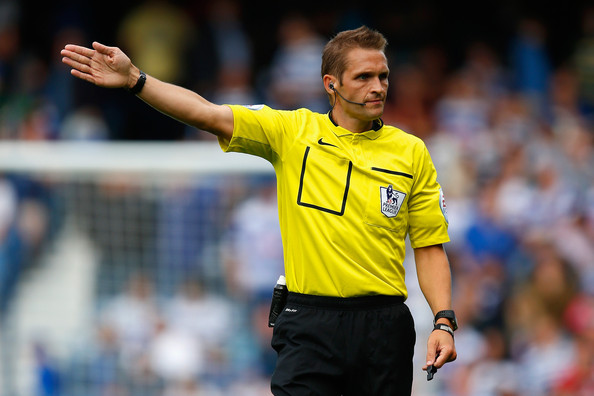 After a tough opening fixture away to Chelsea on Monday night, big decisions going against us and injuries pilling up, we welcomed a very good Bournemouth side to the London Stadium; a team who beat us 4-3 at the Boleyn Ground last season. The referee appointed for this game week two fixture was Craig Pawson.

In a first half, which lacked quality from both teams, Pawson had a relatively quiet half until the 23rd minute when Gökhan Töre was brought down on the edge of the Bournemouth area by Charlie Daniels. In realtime and without replays, the foul looked like it was outside the area but the replays showed that contact was made on Töre’s right foot, which was planted on the white line of the 18 yard box. If Pawson or his assistant saw this, it would of been a penalty as the 18 yard line is considered part of the area. This would have been an extremely difficult decision to make from Pawson’s position. The assistant referee also had a tough view as he would have been on the shoulder of the last defender, around 10 yards away from the incident without a clear view.

We saw two cautions in the first half for dissent with the referees and as mentioned before, the FA are wanting to crack down on intolerable behaviour by the players. The first caution was for Harry Arter after the Bournemouth player raised his arm to block Cheikhou Kouyaté cross. Arter protested with the assistant referee and that was enough to be punished. Winston Reid was the second player to be cautioned in the final stages of the first half after the Kiwi international protested the assistant referee’s decision after Reid thought it came off the Bournemouth player for a goal kick; instead the assistant referee signalled for a corner. Pawson cautioned Reid for his over animated reaction.

Steve Cook was another one of the four players cautioned in the first half. West Ham were on a promising attack on the half way line when Enner Valencia was fouled from behind by Cook. Pawson correctly played the advantage as West Ham were on the attack and cautioned Cook before Pawson restarted the game. Sam Byram was also cautioned in the first half after a series of poor challenges by the West Ham right back. Byram blocked a Bournemouth player just outside the Bournemouth 18 yard box and then fouled Callum Wilson from behind just inside West Ham’s half. If these fouls were separate incidences during the game, both would warrant a caution. However, Pawson made the decision to only caution Byram for both fouls rather than two separate bookable offences for each foul, therefore you could say Byram was lucky.

In my opinion the second half was as poor as the first half unfortunately. There were a few things Pawson had to deal with including a sending off for the Bournemouth side. After being cautioned in the first half for dissent, Harry Arter was sent off for a second bookable offence after pulling Cheikhou Kouyaté. The West Ham powerhouse midfielder was steaming down the right wing on a counter attack. Pawson got this spot on and it shows how costly it is to receive a booking for something as unnecessary as dissent. Pawson cautioned Pedro Obiang after being on the pitch for less than 60 seconds for bringing downing down Bournemouth’s Adam Smith. There were a range of other fouls throughout the second half however these required no action.

In my opinion, I thought that Craig Pawson had a good game. Pawson was in control of the game from the first minute to the last and I agreed with his decision making throughout the game. The only thing that we could spend time talking about was the potential penalty in the first half but I guarantee that without replays, we would not be speaking about this. As a referee, you make a decision on what you can see and I feel that Pawson’s position was good however it is always an extremely tight decision to make and you cannot take anything away from his performance. A note on West Ham; It was a poor game for all and our performance was nowhere near to what we can do but considering playing Chelsea on Monday and against Astra in Romania on Thursday – it was always going to be a tough game. On the other hand, 3 point is 3 points in the Premier League and hopefully we can kick start again after the first win at the London Stadium. We welcome Astra to the London Stadium on Thursday and a win will secure us Europa League football this season.

Let us know your thoughts @TheWestHamWay and @SamRoyden using the hashtag #AskWestHamWayRef with your thoughts, opinions and questions.