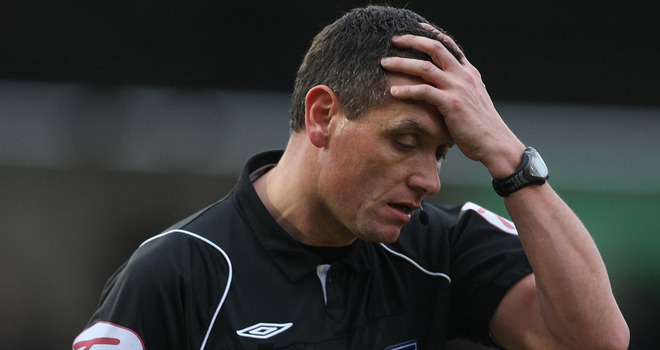 By After an extremely frustrating and disappointing display against Romanian side Astra on Thursday night, West Ham visit Manchester City with a long list of injures which includes star man Dimitri Payet. On a positive note, Ashley Fletcher starts his first full Premier League game for West Ham and Manuel Lanzini was back from injury and started on the bench. The referee appointed for this fixture was Andre Marriner.

We’ve already seen in the opening couple of weekends of the season that referees are being more strict on issues inside the area. Andre Marriner is a good referee and was quick to stamp this authority on the game warning players about pushing and holding before Manchester City’s first corner 60 seconds into the game.
The first of two yellow cards in the first half was issued to Manchester City midfielder Fernandinho. Fernandinho was extremely late with his sliding challenge on Enner Valencia and Marriner didn’t hesitate to book the City man for a poor challenge. The second player to be booked in the first half was West Ham left back Arthur Masuaku for his block on Kevin De Bruyne. The Manchester City player put the ball past Masuaku on the half way line before the West Ham man blocked De Bruyne from progressing forward. There were a couple of other challenges in the first half that Marriner did get correct which includes when Michail Antonio was penalised for a high foot on Nolito. Marriner blew for the foul which was the correct decision.
In my opinion, I feel that Masuaku was very lucky in this half to escape a second yellow card. Even though not every foul is deemed to be a yellow card, the Frenchmen caught John Stones on the knee after the young Englishman beat Masuaku to the ball. Although Masuaku went for the ball, he did catch Stones but fortunately for West Ham, Marriner didn’t deem the incident to be either a foul or intentional. Masuaku also caught Raheem Sterling on the back of the heel and Marriner spoke to the West Ham man and warned him that he was already on a caution. Masuaku needed to be extremely careful in second half to avoid any fouls that would warrant a second booking.

Andre Marriner was more active in the second half and had some big decisions to make. Should there have been two red cards in the second half?
Firstly, the assistant referee correctly disallowed Nolito’s goal just inside after the second half kicked off as the City man was at least two yards offside. There were a couple of yellow cards in the second half for West Ham, the first one being for Ashley Fletcher. The talented youngster was chased down by City’s goalkeeper Willy Caballero after his bad touch gave Fletcher an opportunity to pounce. The Argentinian touch was poor and Fletchers attempt to challenge for the ball was genuine but caught the keeper. Admittedly, it was a foul but Fletcher was more than entitled to go for the ball. Caballero made a bit of a meal of the contact by Fletcher which resulted in Marriner blowing for a foul and cautioning the West Ham striker.

The first potential red card was for Authur Masuaku and as I said above, Masuaku had to be so careful but he really was walking on a tight rope after his challenge on Raheem Sterling. Masuaku again was beaten by Sterling and the Frenchman stopped Sterling from going forward. Knowing Masuaku made at least three or four fouls in the first half, if Marriner had booked Masuaku for persistent infringes to the laws of the game, I wouldn’t have argued with his decision.

The biggest and most shocking incident of the game was Sergio Aguero’s deliberate elbow on West Ham defender Winston Reid. Aguero challenged Reid for the ball but was out muscled by Reid. Ageuro then swung an elbow in the direction of Reid and caught him on the chin/throat. In my opinion, this is a deliberate use of excessive force and warrants a straight red card for violent conduct. This type of foul was associated with Diego Costa last season and time after time he got away with it until the FA acted and banned him. The FA need to seriously review the footage of this incident and action a ban against Sergio Aguero. This is unacceptable behaviour that is not needed in football and as this was missed by the officials, the FA can now look at video replays and make a decision.

In my opinion, I thought that Andre Marriner officiated the game very well and was in control throughout. Despite the missed incident with Sergio Aguero and Winston Reid, I would not take anything away from his performance. A note on West Ham; a poor performance from the team mainly in the first half. The second half was slightly better, with the introduction of Byram and Lanzini, however we are missing more of our creative players. Hopefully the squad will be back to full fitness after the international break and we can start winning games.

Let us know your thoughts @TheWestHamWay and @SamRoyden using the hashtag #AskWestHamWayRef with your thoughts, opinions and questions.