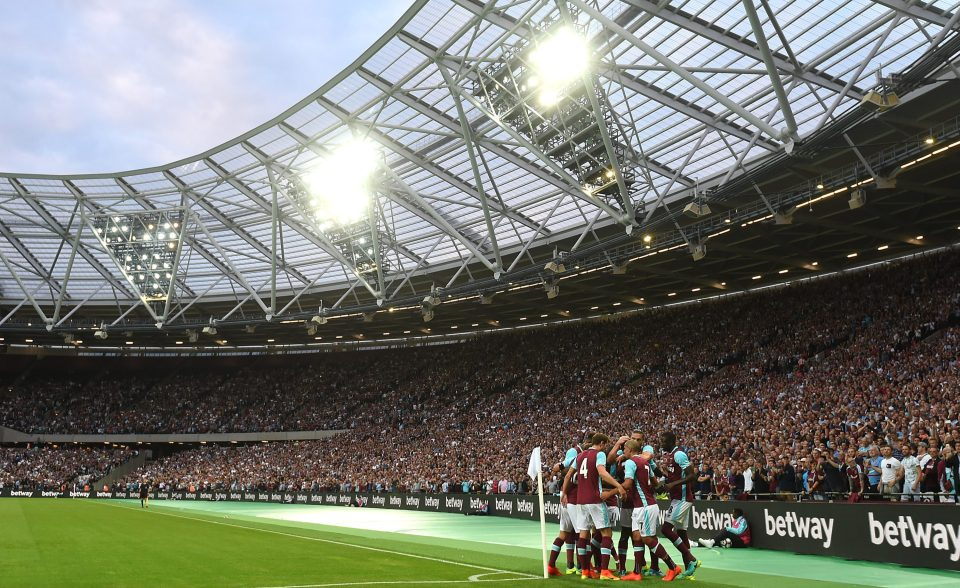 ExWHUEmployee
5 comments
This article is written by Jamie Wright @jamiewright1973The issue of standing at the new London Stadium isn’t going away and the club is in danger of alienating some long standing supporters for good. Is that a good or bad thing? Arguably as football has become a brand the idea of tourist fans is surely appealing for any business model? More will be spent in the ground, rather than going for a pint in their local they’ll drink in the ground. Pie n Mash shops won’t be needed as a hot dog will suffice. The club shop will do a roaring trade and the club income will rise. Appealing as a global brand will bring new sponsorship and a never ending supply of worldwide fans wanting to experience the highs of the premier league.

Why is English football so popular? Is it just the fast paced, high tempo game? Low on technique but high on drama? Or is there something else that attracts the fans? Surely if you just go purely for the football you can view enough on your tv, laptop, iPad or phone? Why do so many want to enjoy the whole match day experience? Football grounds have always been full of characters, some edgy, criminals, tv celebs, big blokes covered in tattoos who look menacing. Groups of lads wearing stone island who want to be part of something. Something from an era not really associated with the suits who run the game or the studios with their gadgets analysing every bit of this modern theatre.

This may seem melodramatic but when the Armageddon season happens and West Ham are relegated who will fill the stadium? We know the ground is littered now with not only tourists but local day trippers too. Fans who want to watch this affordable prem in this world class stadium.  What happens when Rotherham or Coventry come to visit? Where will the tourists be then? At Tottenham’s new ground? Chelsea? One thing is for certain, the loyal supporter who was at the Boleyn, drinking in the Vic, Lion or Stanley will still want to meet up with their mates, escape their lives for a day and have a day out.  We don’t want to lose them, many may have moved out but this is still their club too. Whilst last season was great it could be argued the football has got in the way of a good day out in the preceding few seasons.

All seater stadia require fans to be seated but is that realistic? Does anyone expect fans to sit and applaud when Payet strokes a worldy into the top corner? The problem is that when attacks start to get exciting even the sitters stand up. The young or elderly will still miss the exciting bits as its a natural instinct to those who actually love the game but not necessarily the razzmatazz. So sitting doesn’t seem to be a solution either.

What we need as a minimum is a family area, there are a lot of kids now and they don’t all need to hear that Carroll is a useless c*** or Ogbonna should f*** off back to Italy. They also can’t all stand on seats, some parents will still take their kids into the BML or other known standing areas and that’s their right. They can’t have too many complaints though if they miss a goal. The upper tiers should house the families, elderly and less able should be in the front few rows. West Ham fans are on the whole decent people and certainly show loyalty to other hammers, they don’t want to purposely obstruct someone’s view. A trawl of websites like KUMB or Westhamonline shows that, calling out and banning “fans” who try selling tickets at over inflated value. This is dividing fans and needs some promises from the club rather than threats. The fans have attracted praise in the past for being the 12th man, making the Boleyn an intimidating ground. Ex players from all clubs have a wry smile when the chicken run is mentioned, ex hammers loved it, others a bit fearful.

Let’s not lose that atmosphere, lets harness it, it may take a few seasons for fans to migrate to certain areas but let’s work together on this. Ticket swaps are a start and trying to allocate children to upper tiers.

Once that atmosphere goes then for many the season ticket goes with it, we are at risk of seeing all the experts predictions come true of “they’ll never fill it” should we not work together? This wasn’t a huge issue at the Boleyn and we need to make sure it’s not a huge issue at the London Stadium.