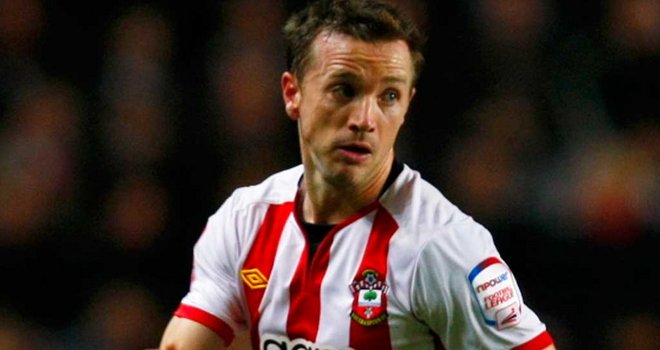 Southampton, I believe, are a team West Ham could beat today if they combat their strengths but hammer at their weak links, their centre backs. Saints Struggles With Virgil Van Dijk injured and Jose Fonte now at the Hammers, the heart of the West Ham defence has been ripped out and in its place a young Jack Stephens and Maya Yoshida have struggled badly. Against Arsenal in the FA Cup, Stephens was at fault in some part for nearly every goal,with the Arsenal play around the box far too quick for him to deal with.

However, it wasn’t just the intricate play that he struggled with:

With the introduction of Alexis Sanchez, Southampton could not afford to defend to high yet Stephens was on the half way line with his partner 10 yards deeper.  Stephens neither cut the ball to feet or down the sides into space, and from here Arsenal scored again through Theo Walcott.

Carroll to do a Deeney

Against Arsenal on Tuesday night Troy Deeney put himself up against the weak link in the Arsenal back line, Shkodran Mustafi, who just could not deal with him.

I expect Andy Carroll to go up against Stephens, whilst Yoshida is also vulnerable, I believe Carroll could expose either equally well.

Then it’s a question of winning the second ball. This is not careless long ball tactics, this is utilising the strengths you have against the opponents weakness and in the Saints centre of defence, there is a big weakness to expose. 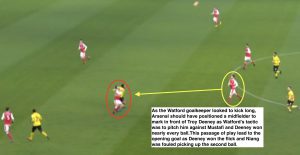 The main danger for me is how well Southampton attack wide. The relationship between the full back and winger on both sides is fantastic.

At times when a winger moves infield this is the trigger for the full back to overlap, as you can see blow. 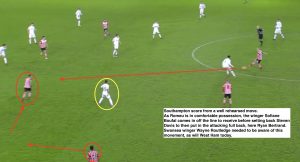 However if the winger keeps his width, both full backs intelligently recognise to attack on the inside as Soares does here against a Leicester City side that were run ragged at Saints last league home game.