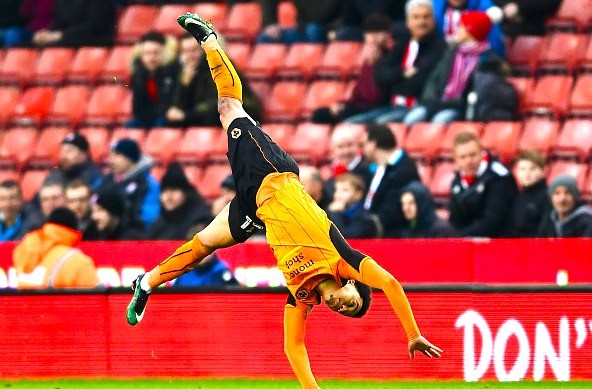 According to the People, West Ham United will battle Everton for the signature of Championship star Helder Costa. The Portuguese midfielder began his senior career at Benfica, which started promisingly after the young prospect bagged a goal on his debut. However a lack of consistent starts for the Portuguese league leaders resulted in Costa pursuing loan moves to Deportivo, Monaco and Wolverhampton Wanderers. The tricky winger finally settled in England with the Championship club and signed a permanent deal in the January window for a record-breaking £13million on a four-and-a-half year deal. Helder Costa has not looked back, scoring and assisting fifteen in his first six months at the club. Several Premier League clubs, including West Ham, have noticed his talent and are contemplating a summer move. Wolves will attempt to receive double the money they paid for the Angola-born playmaker, should they sell him this upcoming window.

West Ham have struggled upfront this season despite being the fourth-highest scorers in the 2015/16 campaign. The East London club currently lack substantial quality in the wide areas, after the dismissal of Premier League star Dimitri Payet and the disappointing season of Sofiane Feghouli. On the bright side Slaven Bilic shall have an extra £25million to spend after his French superstar returned to Marseille – whilst the temptation of an in-form talented winger, alongside pressure from fans for major cash to be splashed in the summer might make the Croatian boss appeal to the Portuguese prospect.

To see what Helder Costa is capable of, watch a high-definition video of his 2016/17 goals and skills here.