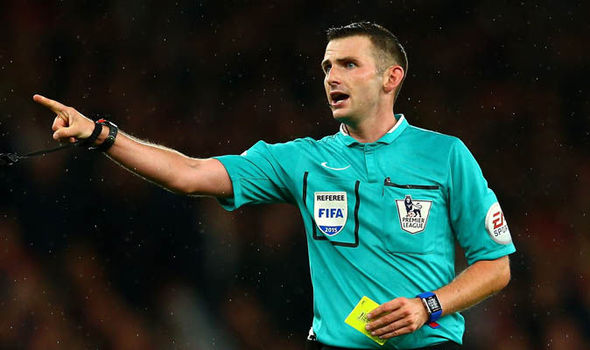 After being embarrassingly thumped, once again, at home at Manchester City, it was a great response by the team to win away at struggling Southampton last weekend. We’ve won our previous 3 Premier League games and Andy Carroll has been influential scoring 4 goals in 3 games, however Carroll unfortunately missed this game due to injury.

Michael Oliver was the referee appointed for this gameweek 25 fixture. This is first fixture that Oliver has taken charge of West Ham and so far this season Oliver has issued two red cards, awarded 11 penalties and 4 in 4 consecutive Premier League games.

I have said on many occasions that Michael Oliver is one of the best referees in the league. He is up there with Mark Clattenburg in my opinion. However, his first half performance was nowhere near the calibre of Oliver’s past performances.

The first half was riddled with poor decision making and controversy at both ends of the pitch. The first poor decision by Oliver was to fail to see the foul on Sofiane Feghouli by Chris Brunt in the lead up to West Brom’s first goal. It was evident that Brunt caught Feghouli’s left foot before getting the ball. Oliver failed to see this and allowed play to continue and West Brom scored from it.

The second controversial moment in the first half was to disallow Sofiane Feghouli’s goal which I believe was for offside. When the incident happened, there seemed to be a lot of confusion on why the decision was made. In real time, I thought the assistant referee disallowed the goal because Sofiane Feghouli was in an offside position but this wasn’t the case as it was Michail Antonio.

When I looked at the replay, you can see that Antonio was in fact between Dawson, who was down injured, and Ben Foster. The law states that ‘a player is not in an offside position if level with the: second-last opponent or last two opponents’. This would mean that Antonio was in an offside position. Once Antonio attempted to get back onside and he ran into Ben Foster, Antonio was deemed to be interfering with play before Sofiane Feghouli scored. I had to re-watch this 3 or 4 times before I came to this conclusion which the assistant referee and Michael Oliver do not have the luxury of. 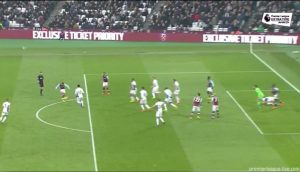 There were a couple of penalty appeals by the West Ham faithful. One was after Jack Livermore held Robert Snodgrass and prevented the Scottish international from turning and proceeding into the box. The other was Ben Foster seeming to foul Michail Antonio, Oliver waved both of these appeals away.
At the end of the first half, Michael Oliver added 3 minutes of additional time to the frustration of Slaven Bilic. I wasn’t sure how Oliver came to the conclusion of 3 minutes when there were two sizeable stoppages for head injuries.

A better second half by Michael Oliver but it seemed like it was his assistant referees which were letting him down. There was a third penalty appeal by West Ham fans when Calleri went down under pressure inside the penalty area. My opinion was that Calleri went down way too easy under minimal pressure and Oliver rightly waved it way.

For West Ham’s equalising goal, Michail Antonio was in an offside position when Manuel Lanzini’s shot rebounded off the bar into the path of Feghouli. The assistant referee was correct to not flag Michail Antonio offside as the West Ham powerhouse wasn’t interfering with play, even though he was beyond the last defender.

After West Brom’s 94th minute equaliser, Slaven Bilic was sent to the stands after throwing the pitch side microphone down in frustration. Bilic was venting his anger at Oliver and his assistant after West Brom were awarded a throw in, which in fairness to Bilic was a West Ham throw in, that led to the corner that West Brom equalised from. Unfortunately for both Bilic and Jurcevic, the FA will review their behaviour and will certainly be fined, potentially a touch line ban but it would be harsh.

Overall, Michael Oliver had a tough day at the office with multiple decisions going against West Ham and which will be looked at with a fine tooth comb. That fact that Oliver failed to see the foul on Feghouli in the lead up to West Brom’s first goal was disappointing amongst other strange decisions.

It’s a sickening feeling to lose 2 points in the final seconds of the game. We showed great passion and spirit to fight back before their 94th minute equaliser. The squad is off to Dubai for warm weather training as we don’t have a game until the 25th, when we visit Vicarage Road to play Watford.