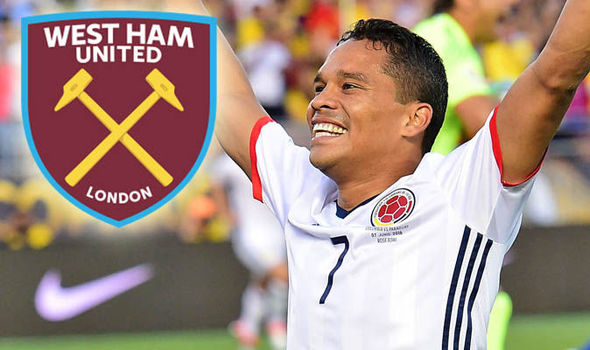 Hi all, I am already on my third piece this week and I am thoroughly enjoying them and love receiving feedback and comments on what you like and what can be improved. I will try to get 2-3 articles out a week for the website and would love the feedback to continue on every piece.

A great goalscorer is the hardest thing to find in football. West Ham have been struggling to find one since Dean Ashton who was forced to retire at the age of 26. Ever since West Ham have failed to sign a striker who consistently scores goals. Under Sullivan and Gold West Ham have signed 32 strikers in 7 years who have in total managed 128 goals in 643 games which is quite appalling goals to game record. Players like Zaza, Benni McCarthy and Mido have definitely not set the world on fire. Carroll in my opinion is our most dangerous striker in recent times when fit and is seriously hitting form with 4 goals in 2017.With Diafra Sakho also injury prone, Jonathan Calleri only scoring once and Ashley Fletcher still raw, we need some other options. Here are some signings who could be a consistent scorer in claret and blue.

It was a long summer chasing the Frenchman from Lyon with our highest bid at £42.5 million which Lyon swiftly rejected. According to reports, Lyon have put a £60 million price tag on him and will be made available in the summer which may signal the board to go back for him. Quick, strong, a great athlete who definitely has an eye for goal. Lacazette would be perfect in our system. With already 20 goals in 19 appearances for Lyon in Ligue 1. I’m sure given the chance he would justify his price tag. Although with clubs such as Arsenal and Liverpool rivalling us for his signature, we would need to pay very big to land him. Could Sullivan pull it off? If he joined, would he flop? I’d love to see him in claret and blue but we may not be ‘big’ enough for him.

Again, another long summer dragged out over this transfer. Constantly getting updates on my phone about this transfer with different Italian and therefore unreliable sources saying the deal is done, it got everyone excited. The deal was far from done with Bacca rejecting West Ham and wanting to stay at AC Milan for at least another season. With a year passed since last summer it is looking even likelier that Bacca will leave AC Milan with fans turning against him and getting boos every time he makes an appearance. This season he has scored 10 goals in a total of 1481 minutes-averaging a goal every 148.1 minutes (he has also started on the bench 4 times). Bacca seems to have all the attributes, pace, skill, clinical, eye for goal, link up play. He would seem to fit in our system and if he joins and scores goals, we should all forget about when he rejected us.

Very well known in the Premier League, Sturridge is regarded as one of the most clinical when fit. Keeping him fit is the problem, consistently injured he seems a great match for West Ham. But the risk could be taken as when he is fit, he scores goals. Having only played 754 minutes this season, he has returned with 7 goals which seems incredible as players need a run of games after injuries to find form and especially strikers who need to regain fitness to score goals. Sturridge is a natural goalscorer, if any club managed to keep him fit he would easily score 25+ goals. At 27 and when fit not starting for Liverpool, Sturridge needs to play regular first team football and West Ham seem a great match but could we keep him fit? Probably not but his quality in and around the club would lift us but it would be a gamble with his injury record.

In my eyes, THE most clinical striker in the Premier League. At 34 Defoe is still scoring regularly for a bad Sunderland side with poor service. Leaving us at a young age was a mistake and Jermain has admitted that and says he has unfinished business with the club and was interested in re-joining in January as most of his family support the Hammers. Already grabbing 14 goals this season in a relegation threatened side, Defoe has still got his marvellous goal scoring ability. The English duo of Jermain Defoe and Andy Carroll could terrorise defences, tall and small strikers always seem to work. Carroll’s flicks down to Defoe would be incredible and almost guaranteed a goal. It was obvious Defoe was not leaving Sunderland in January with him being irreplaceable, why would they sell their only hope of surviving? Although it is more likely he will be given the green light to move in the summer when Sunderland have more time to replace him, but could £10m-£15m be too expensive for an ageing Defoe who is only a short-term option?

Another long summer transfer target, Batshuayi was not interested in joining us as he knew bigger clubs were after him. Although after we bid £28m for Michy all he seemed interested in was his wage which Chelsea could offer much more than us, currently on a rumoured £80,000 a week with bonuses. Now he is rotting on Chelsea’s bench having not started a single premier league game and only playing and starting in a handful of cup competitions, Michy seems not rated by Antonio Conte who may be interested in shipping him out permanently or on loan for the 17-18 season. Personally, I think we should go back in for him and actually see what he can do in the Premier League although some fans may not accept him but people and players make mistakes, he would be a good option.

So out of those 5 options who would you sign? It is clear to everyone we need a striker to ease our problems.