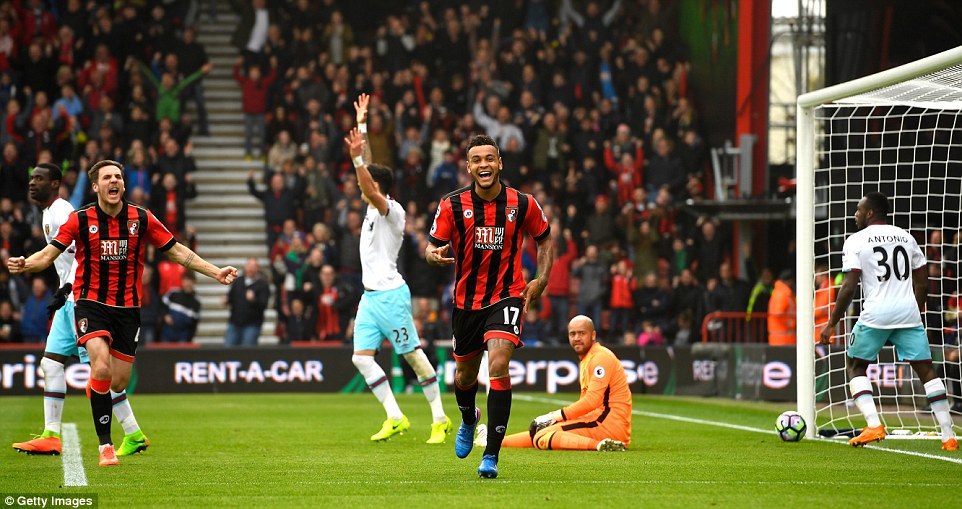 West Ham fell to Bournemouth today 3-2 in an afternoon match at Vitality Stadium.   The Cherries needed a hat trick from Joshua King late in the match to overcome West Ham.  The Hammers, still smarting from a home loss to league-leading Chelsea, looked to get back to winning while facing a Bournemouth side which hasn’t earned a league victory since December.

Early on it looked tough for visiting West Ham, as Charlie Daniels moved goal side of Sofiane Feghouli, causing the Algerian to put a sloppy challenge on Daniels.  Referee Bobby Madley awarded the penalty kick and it looked like West Ham was going to be in an early deficit.    Josh King was able to send Darren Randolph the wrong direction, but his spot kick missed wide of the right post.

In an unexpected turn of events, on the ensuing counter attack Feghouli atoned for his earlier mistake and found an open Michael Antonio, who scored on a slow rolling left-footed shot.   So in 30 seconds West Ham went from a probable deficit to a quick lead.

Midway through the half, Josh King earned his own atonement for his missed penalty kick when his ten yard, left footed flick in traffic got past Randolph to give the Cherries the equalising goal.

The mood sunk even further for West Ham when José Fonte challenged Marc Pugh and Madley awarded the hosts a second penalty kick.  After King’s earlier miss, Eddie Howe went with Benik Afobe for this attempt.  Afobe’s weak spot kick was gathered up in Randolph’s arms as the Hammer’s avoided disaster again, and the Cherries were 0-2 on penalties in only a half of play.

The only highlight of the first half’s two minutes of added time was Bilic trapping an out-of-play ball in the technical area and accidentally passing it into Eddie Howe’s back.  Otherwise both teams went into the tunnel knotted up 1-1.

The second half began with no changes to either side.  But the hosts took the lead quickly as King found a goal after taking possession from a Afobe pass.  Bobby Madley had to discuss with his assistant referee to verify King was onsides, but the ruling was upheld and Bournemouth took the early 2-1 lead.

Down a goal, and looking for some spark, Bilic brought on Andre Ayew, Sam Byram, and Robert Snodgrass midway through the half .  It took a while, but finally in the 82nd the Hammers found their equaliser, as Ayew took a pass from Byram and scored from 12 yards out.

In the closing minutes of the half West Ham looked the aggressor, as they seemed intent on grabbing all three points, but in the 90thminute poor defending led to a Jack Wilshere shot which Randolph saved, however the rebound was put in by King, earning him a hat trick on the day, and putting the Hammers behind with only five minutes of stoppage time.  The added time was unproductive for West Ham and Bournemouth was able to hold on for a victory at home.

As bad as the result was, Darren Randolph should be applauded for his game.  Allowing three goals was not the fault of the West Ham keeper, whose saves and smart play kept the match from looking utterly embarrassing.  To reiterate West Ham’s personnel challenges at right back and at forward is useless at this point.  Hopefully Bilic can experiment with his current roster to finish this spring campaign with some momentum for the fans.  As poor as the Hammers have fared against the top six clubs, as of late, West Ham has been able to deal with the lower half of the table.  Today’s result is worrying.   It appears the “Kouyate in the back” experiment is as big a failure as the “Antonio at Right Back” experiment from earlier in the season.   Today Sam Byram’s short-shift looked fine.  Byram set up the second goal, and played well enough in the 15 minutes he was on the pitch.  On the opposite side, Aaron Cresswell doesn’t look fit.  His talent at left back is well known but the past two months he has shown surprisingly poor form and looks as if he is playing injured.

The defending league champions, Leicester City, come to the London Stadium next week.  As poorly as they have fared this season, Slaven Bilic has always had trouble beating them.  There is no better time for the West Ham gaffer to find some innovative change to his lineup to give this club a win they desperately need.