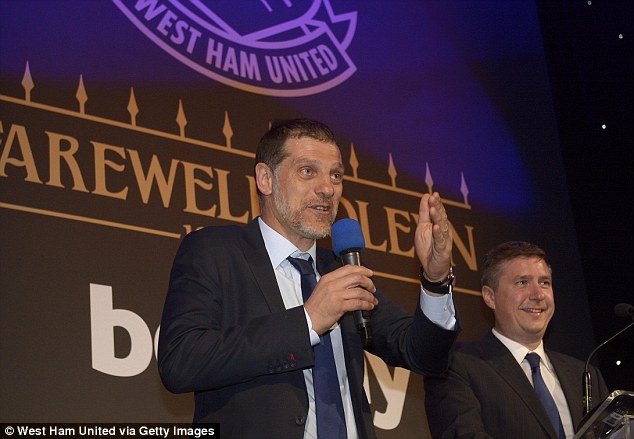 Hello everyone. I would like to join the long list of people who have given their opinions on Slaven Bilic this weekend.

First of all, I just want to make it clear that I love Slav as our manager. I think he is seen as a really likeable guy to most fans, and I really would love to see him succeed. He gave me the best season I have ever witnessed as a West Ham fan since I started supporting the club, and I will always be grateful for that. However, does that mean that he is deserving of keeping his job, after nothing short of a terrible season? I’m not so sure.

To some extent, I can sympathise with Slaven, as he has had a lot of negativity to put up with this season. He has had to deal with the stadium move, the poor summer window, the Payet situation, injuries to key players and so on. Now I am not for one second saying that it is just Slaven, because I feel any manager would have struggled to cope with these problems. I feel he has dealt with these issues reasonably well, better than some managers would have done anyway. So there is a very strong case for him to stay on as our manager.

However, there is also a strong case for him to not keep his job. Slav is a very stubborn man, and his stubbornness really frustrates a lot of fans, especially of late. This all leads to the right back situation of course. This whole thing started around a year ago when he thought he could turn Michail Antonio into a right back. The same is now happening with Cheikhou Kouyate. Its not on, especially when we have Byram and Arbeloa available.

Another reason fans are getting frustrated is because he continues to select Mark Noble. I’m not saying I agree with the stick that Mark has received lately, but I do not agree that he should start every week just because he is the captain of the club. I am a firm believer of playing your best XI, and Mark Noble isn’t in that category, especially this season. However, it seems as though Mark is untouchable in Slav’s eyes.

Slav has not helped himself in previous transfer windows either. He has made some poor signings, but he has also missed out on some deals too. He has brought players to the club such as Jelavic, Emenike, Zaza, Tore etc. All of these players have been huge disappointments. His refusal to sign a right back in two transfer windows also comes as a huge disappointment and frustration to me. If he is still in charge, he needs to sort it out.

Now onto the issues on the pitch. I just want to say that I was at the game yesterday, and the defending from us was absolutely embarrassing. We are shipping goals for fun at the moment and it is very worrying. We have conceded 103 goals in Slaven Bilic’s 67 Premier League games as our manager, not to mention we have conceded 62 in all domestic competitions this season. That stat is completely unacceptable. Bilic is a former defender himself, and there is no excuse for our defending to be that bad. If he is to remain as our manager, then the first thing he needs to do is get a defensive coach to assist him.

As far as potential replacements go, there is only one man that has been mentioned. That man is Roberto Mancini. He is a manager that has won titles and has major European pedigree on his CV. People say that he has done this with a large budget and yes that is true, but it isn’t as though we are short of money ourselves. We have billionaire owners. Mancini is a manager that likes to build from the back, which is something that I think needs to happen at West Ham. Yes he is defensive minded, but with the attacking options we have at the club, we will not lose the threat we have going forward. Roberto Mancini is rumoured to have said that he wants the West Ham job too.

Its a very tough decision to make on Slav, and I would say I am still 50/50 right now. I have been a big supporter of his ever since he arrived, and I think he deserves until the end of the season when you take everything into consideration. However, I am not sure if Slav will change his ways in order for us to move forward as a club. Plus if someone like Roberto Mancini wants to take over your club, then I believe that would be an opportunity that is too good to turn down.

Thank you all for taking the time to read this.