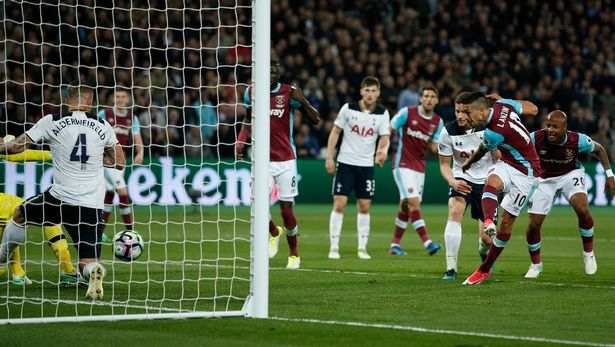 West Ham beat Tottenham 1-0 tonight in an early May Premier League match which might represent the long-awaited “signature win” for the home club in the new London Stadium.  For West Ham, they defeated their top London rival and possibly secured safety from relegation in one single night.  For Spurs it might be the end to their hopes of overtaking Chelsea for the Premier League championship this year.

Mauricio Pochettino’s side arrived in East London after winning nine straight matches in the league.  West Ham, devoid of attacking options with Andy Carroll and Diafra Sakho chronically injured and Michael Antonio out for the season, we where merely hoping to keep the match respectable.

Early on, the Hammers played behind the ball but made the most of their counter attacking opportunities.  Six minutes into the match Manuel Lanzini took an Andre Ayew cross and delivered it wide of goal.

The London Stadium crowd felt ill during a later exchange where Harry Kane shot on goal which was deflected by Adrian.  Dele Alli’s rebound shot was blocked by Jose Fonte, and a third immediate attempt was taken by Kane, only to be saved by Adrian.  Spurs were forced to settle for an unsuccessful corner kick out of that exchange.

Despite the overwhelming possession advantage by the visiting club, West Ham retired at the half with a 0-0 score and a raucous crowd of supporters encouraging their club.

The fans were almost rewarded immediately after the break, as Ayew took service from Sam Byram but sent the ball way high of the goal.

The West Ham supporters had to wait until the 65th minute of play before they were rewarded for their enthusiasm, as Aaron Cresswell sent a cross into traffic and it touched both Byram and Ayew before it fell to the feet of Manual Lanzini at the six yard mark.  He immediately sent the ball past Hugo Lloris, and sent the stadium into a loud frenzy.

With chances on both sides, the Hammers were able to milk the final 35 minutes of play plus five additional minutes of time, and the celebration was on in East London.  (A few Chelsea supporters took notice as well.)

And just like that, West Ham temporarily slides into 9th place.  After a brutal season after the sky-high expectations of the pre-season, the loyal fans at West Ham have hope and some enthusiasm going into a very important summer transfer period.

Of note tonight, in addition to Lanzini’s performance, his fellow Argentine, Jonathan Calleri put in a hard-working shift.  And what can be said about Adrian?  Three consecutive clean sheets.  The beloved Spaniard certainly is having his say about whether a new goalkeeper is needed in the summer.  A quick stop in the top half of the table is an unexpected turn of events. With two matches remaining, hope for the future is the best thing West Ham can sell at this point.