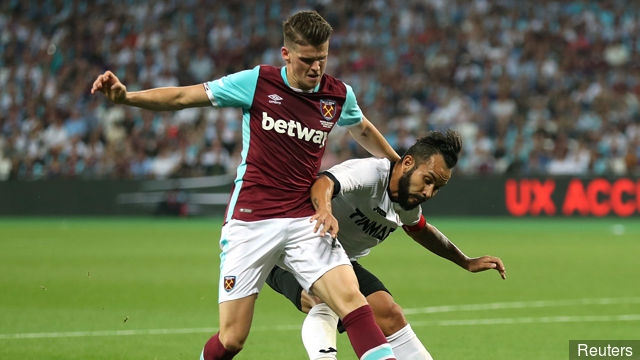 Well, it took until week 36, if you ignore the Chelsea cup result, to secure a win that hopefully beds us in at the London Stadium. I have to admit I am not a big believer in the Stadium being a problem. I think players, fans and everyone else have used it as an excuse but the reality is I think the mentality of the Manager and players has been the biggest issue this year. Two up against Watford and we lose 4-2, and it could have been 10-2, and yet we manage to beat arguably the best football playing team in the league 1-0. I think the win is based on three things. Firstly, it’s a rival. A big rival. Playing to be Champions. We were never going to lie down and roll over. Secondly, we were not safe, we still needed a point or two to be safe, and this was an opportunity. Third and last, I do think the players like Bilic. I’m not sure he is 100% safe just yet. In my mind, he has six to eight games to prove to us he is the real deal and the problems this year are behind us. Have us in the mid to upper mid of the table, and I’m sold, if we are not, then we should let him go.

But for now, let’s saviour that win against a team we hate. It was sweet that it guarantees us safety and pretty much kills them off in the title race.

While watching the game on TV, it’s hard to track all the players and see the off the ball work rates. What stood out for me was Calleri’s constant running, Ayew’s hustle and both wing backs getting up and down the pitch. For all those fans who said Calleri is worth waiting on, I did start to see increased effort, better hold up play and winning long balls with some good flick-ons. His finishing is still poor, but then again Fletcher missed an easy chance at the end which would have been a nice way to end the game. The midfield was dominant not giving Spurs anytime on the ball or play to their strengths, and the defence was outstanding. For a change, it was not the last tackle dance all the time – apart from a series when Adrian spilt the ball and then made a couple of excellent saves – we never looked threatened at the back. The effort over the last three weeks has been outstanding.

Antonio 9, Lanzini 8, Carrol 7. The next pure striker to score Calleri, with 1. When your two top scorers are midfield players, it’s clear that a problem exists. While the last three results have been positive, we have scored a total of 5 goals in the last seven games. With the match against Hull the last time a forward, Carroll, scored. If your take Antonio’s and Lanzini’s output in addition to the other midfield players, then add in a 15 goal a season front man then there is no reason for us not to be comfortable and pushing for a top 6 or higher place. If an offer for Carroll comes then we bite their hand off, same goes for Sakho. We need to pick up two reliable players who either on their own or between them can do the business for us and take the pressure off the midfield and let them be creative and serve.

Anybody have a bad time Friday night? Anybody? It’s a serious question. If we had of lost 1-0, I am sure people would be complaining about the pitch size, location of the stadium and just about everything else. Granted living in the US does not give me the right to have an opinion about all of this, but watching the game on TV, hearing the fans and listening to the commentators say that the place was loud with a great atmosphere reminds me that we the fans have a part to play in our success. What you, the fans that went to the game, did on Friday needs to be replicated on a cold Sunday against Brighton next year. It does not matter which team comes to our new home, it’s our home, they are not welcome, and they will leave with a bitter taste. Players have a responsibility to give 100% as do we the fans.

Man of the Match

I’m not going to pick a man of the match, this was a team performance, and everyone deserves credit. Lanzini was brilliant, Adrian has matured the last few weeks and was class again. Reid, Fonte and Collins were dominant. Noble and Kouyate were active and mopped up anything. But it was Sam Byram who quietly went about his job with no fuss and looked the part at right wing back. It’s been a horrible position for us all year. The last few weeks though Byram has steadied his play, stopped the stupid mental mistakes and made some great decisions. Pulling Son’s shirt was a great decision, he knew exactly what was going to happen when he got lost on that play, and Son was about to sprint down the wing. Byram has two more games to make that position his own and help Bilic in the transfer window by not having to find a top-quality RB/RWB.

See you next week.