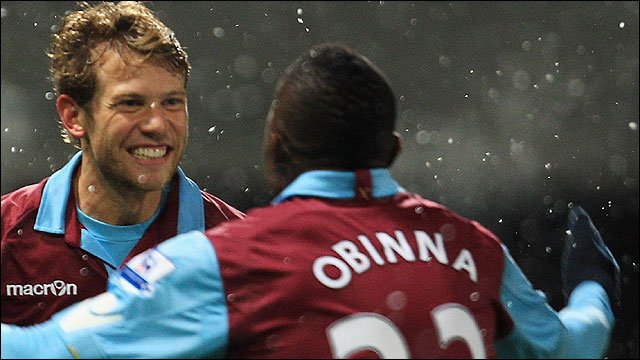 Then look at the final score.

No, your eyes are not deceiving you. Yes, we really did beat Man Utd 4-0 with those eleven players on the pitch.

It was the night Jonathon Spector turned into Frank Lampard. The night Carlton Cole transformed into a clinical striker. The night when Victor Obinna, who had blown hot and cold throughout his short spell with the club, turned in a performance that was phenomenal on every level. It was undoubtedly the highlight of a dreary season and the jewel in a cup run that saw us come one game shy of a final.

West Ham would go into the game on the back of a win against Wigan but deep in a relegation battle. They would be without Lars Jacobsen who was cup tied for this game, and Mark Noble who had been ruled out for the remainder of the calendar year. Scott Parker had been rested by then boss Avram Grant to keep him fresh for upcoming Premier League games whilst Thomas Hitzleperger, Kieron Dyer and Jack Collison were long term absentees. Manchester United came into this game on the back of a 29 game unbeaten run in all competitions.  The Saturday before hand they battered Blackburn Rovers 7-1.

There could only be one winner, surely.

It was a night under the lights at Upton Park. A special occasion. A raucous one. One that I went into with very little hope and came out of with the feeling of euphoria that only football can give you.

There was an early spell of West Ham pressure that soon melted away and was replaced my Man Utd dominance. The night could have ended so differently when Obertan burst into the Hammers box and his low effort was stopped superbly by Rob Green after just seven minutes. After seeing Man Utd put seven past Blackburn the weekend prior and now knock the ball around the pitch with ease It was beginning to feel like one of those nights I’d quickly want to forget.

Little did I know that Jonathon Spector had eaten his Weetabix that morning.

Prior to this night Spector had made over 100 appearances in English football. He had yet to score a single goal. His West Ham career up to this point he had been used mainly in defence, covering at right back and centre back. Although never the most solid of defenders Spector was certainly able to a job when required. Even when asked to play in midfield he never did show much of an attacking impetus. Instead he focused on the defensive side of the game. Protecting his back four. Winning the ball. The basics. On this night he discovered that there could be far more to his game. Throughout the night he would make marauding runs both with and without the ball. He would create space, drive the team forward and terrify defenders.

The first of such runs came in the 15th minute. Taking hold of the ball by the half way line, he burst past an ineffective Anderson challenge with pace I wasn’t aware he possessed. He laid the ball off to Obinna who lurked on the edge of the area and continue his run, curving and sprinting into the Man Utd penalty area. Obinna unleashed a left footed shot which took a deflection, wrong footing Kuscak and landing in the net. The fans celebrated for almost a full minute until the referee deliberated with the linesman and disallowed the goal. The deflection had come from Spector, who had continued his run and found himself in an offside position.

Admittedly I was never Spector’s biggest fan during his tenure. In fact, that is an understatement. I have vivid memories of voicing extreme criticisms of his performances in whichever position it he happened to be playing in that particular game. I can even remember my exact reaction when the goal was disallowed.

Even when he does something right he finds a way to screw it up.

He shut me up mere minutes later.

Seemingly buoyed by exposing a chink in Man Utd’s armour West Ham went forward again. Obinna picked up the ball in the corner of the penalty area and sent in a floating cross. At some point in the first fifteen minutes he found the instincts of the poacher and got goal side of Darren Fletcher. Arching his neck he found a way to put the ball past Kuszcak and into the back of the net. This one stood. Spector scored his first goal for West Ham against his former club.

The tide of the game had turned. Snow had begun to fall on this special night as the fans roared on their team on under those famous lights. We were now winning most of the individual battles. Our home turf was rocking. The fans were singing. Man Utd were on the back foot.

Spector seemed to be on a mission to prove everything that I had said about him was wrong. After waiting for over 100 games to get his first, he only waited another 15 minutes before grabbing his his and West Ham’s second. Playing in that Scott Parker role he picked up the ball deep, turned past one statue disguised as a Man Utd player. He proved that the adage is correct. If you run at defenders with pace things happen. He stormed through a sleepy Man Utd defence before hitting a heavy pass into Obinna’s feet. To his credit, Obinna was able to lay the ball back off to Spector despite being under a heavy challenge by Fabio. From the six yard box Spector was able to slam the ball home from close range with Smalling and the goalkeeper unable to stop him.

West Ham were in dreamland.

The mantra of the remainder of the first half was to keep the score line as it was. A Bebe header and botched Boa Morte clearance meant Green was called into action twice more before the break. The Hammers were able to hold on until half time.

The snow only got heavier as the second half began. West Ham continued their determined performance and continued to get the better of Man Utd. The score only got better as Obinna picked up the ball by the corner flag. Putting in a near perfect cross Carlton Cole was able to get on the right side Smalling and fire a header past the goal keeper.

We thought it couldn’t get any better.

Obinna, who had dazzled the Man Utd defence and already racked up three assists in this game, worked on his fourth when his quick feet and impressive trickery left Rafael Da Silva (who was on for his brother Fabio) on the floor. He then found Carlton Cole with a low hard pass inside of the area.

I have never rated Johnny Evans as a centre back and I am certain the reason why goes back to this moment. The way Cole controlled the ball and rolled Evans made me certain that they were Didier Drogba and Phillipe Senderos in disguise. The finish that followed was both composed and clinical and put Man Utd, and their unbeaten run, down.

What happened following this game and for the remainder of the season is best left forgotten. Tough, painful times would follow before ending with a relegation which set the club back years. What we must not leave to the history books was the performance of this and the elation we all felt when that final whistle blew.