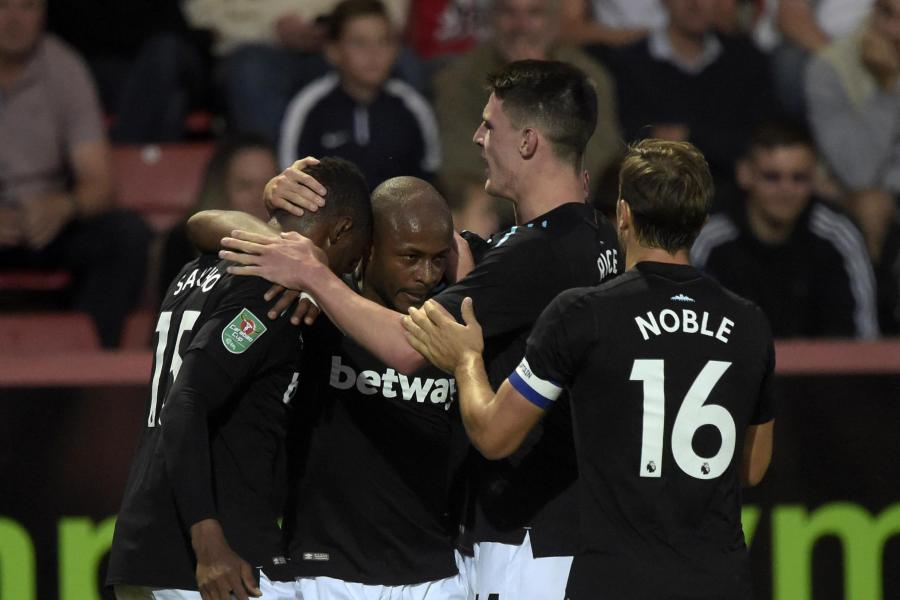 After two heartbreaking Premier League matches to open the 2017-18 season, Slavin Bilic took his club west for a less formidable opponent, as the Hammers opened up their Carabao Cup campaign with a second-round match up against Cheltenham Town.

After an uneventful first half, without much goalkeeper play on either side, West Ham scored in somewhat of a flurry as both Diafra Sakho and Andre Ayew each etched the score sheet within minutes of each other.

In the 40th Sakho took a pass from Sam Byram, turned in the penalty area, and fired it into the far corner of the goal.  Three minutes later, it was Ayew’s turn as his right footed shot found the goal after the ball was played in by Sakho.

With the two goal lead and momentum on his side, Bilic made no changes during the break.  Early on the second half, James Collins, both celebrating his 200th first team start, and his 34th birthday, almost found himself on the score sheet as his header off a Mark Noble free kick was slightly over the crossbar.

Despite his failure to score, James Collins was clearly the man of the match.  He led the team in passes, clearances, and possibly possession.  Collins continually disrupted the Robin’s offense.  He was an imposing presence against the League Two opponents.

Late match substitutions of Javier Hernandez and Cheikhou Kouyate were welcome by the 1,000 or so West Ham supporters who attended the match, however neither player was able to add to the two goal lead.

After three minutes of added time, Oliver Langford’s whistle ended the match and the Hammers had earned their spot in  the (Chinese overnight?) round three draw.  For West Ham, Bilic was able to give minutes to some younger players, and he left the ground with no major injury.  Pedro Obiang took a strong challenge but he remained in the match for the final 15 minutes of play, and looked to be fine.

Saturday, the still-homeless Hammers head to Newcastle to face their fellow winless Magpies in what will be a very important match for both clubs.  Against Manchester United the club were out matched, against Southampton the club were out disciplined.  Hopefully Slavin Bilic can turn things against a struggling Geordie opponent.

Stay updated as the transfer window closes by keeping an eye on TheWestHamWay.co.uk   Ex will have updates regarding transfers and our roster prior to the Newcastle match so stay tuned…