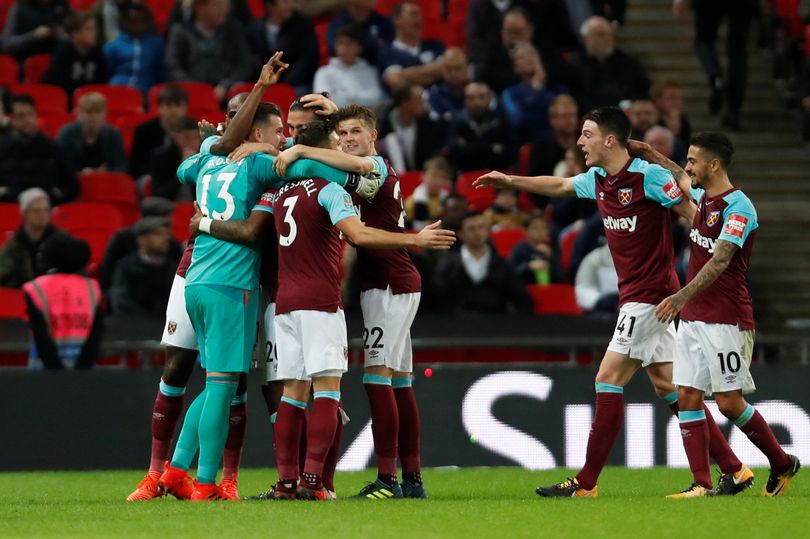 4th Round of Carabao Cup

Tonight West Ham defeated Tottenham 2-3 in a fourth round match of the Carabao Cup at Wembley.  For both teams it was a match they needed to win.  For Spurs, much has been written about their poor form in their temporary home of Wembley Stadium, and for West Ham, their poor form this season has shown at grounds all over the UK.  Slaven Bilic made nine changes to his starting XI from his Saturday defeat against Brighton.

The scoring came early and often as only five minutes in it was Moussa Sissoko who took delivery from Son and slotted it in on a quick-paced counter.  Ten minutes later it was almost 2-0 as Dele Alli was unmarked on the far post during a Spurs corner.  The header was skillfully batted away by Adrian.

However Alli wasn’t denied long:  In the 37th minute of play, Son found an open Dele Alli whose shot was slightly diverted by Declan Rice’s head and found the inside of the far post to bring the hosts up 2-0 and firmly in control of the match.

After a full half of sleepwalking, the second half didn’t begin with any great urgency from the Hammers, however ten minutes into the half West Ham found a needed spark as a corner was headed out, but Edimilson Fernandes turned it back in with an 18 yard strike.  Michel Vorm was unable gather the ball and the opportunistic, Andre Ayew poked it in.

With the first positive action of the entire evening, the visiting club finally showed some enthusiasm after an entire match of apathetic play.  And with Ayew “feeling his oats” he got a second goal only moments later.   It was Andy Carroll heading the ball to the feet of Manuel Lanzini that found an open Ayew who was able to finish.

Now level, West Ham really wanted to take a victory at the legendary grounds.  It was a Lanzini corner kick which Angelo Ogbonna used all 6 ft 3 inches of his frame to head into the goal.  With the first lead against a top six club in what seemed to be ages, the 5,000 West Ham supporters behind the goal were loud and made their presence known as the sparsely-attended Wembley crowd moved somewhat prematurely towards the exits.

The final moments of the match found Spurs relentlessly attacking.  18-year old Declan Rice, Sam Byram, joined with Ogbonna in desperately trying to protect Adrian and prevent the hosts from finding an equaliser.     Finally, after four eternal minutes of added time, Mike Dean’s whistle gave the crowd from the East End some relief.

This match might give Slaven Bilic temporary safety, but a continued poor run in the Premier League will definitely result in a change at the top.  Moving to the quarter final round of the League Cup pales in comparison with West Ham’s performance in the league.    Today was the first time West Ham has scored three goals away from home in all competitions since February. (at Southampton)  Bilic and company have a prime opportunity to continue with the scoring as they visit last-placed Crystal Palace.  The joy felt by the Claret supporters will be short lived if West Ham underachieves in this weekend’s match.

Be sure to stay with the TheWestHamWay.co.uk for full coverage of West Ham’s visit to Palace and early January transfer news.