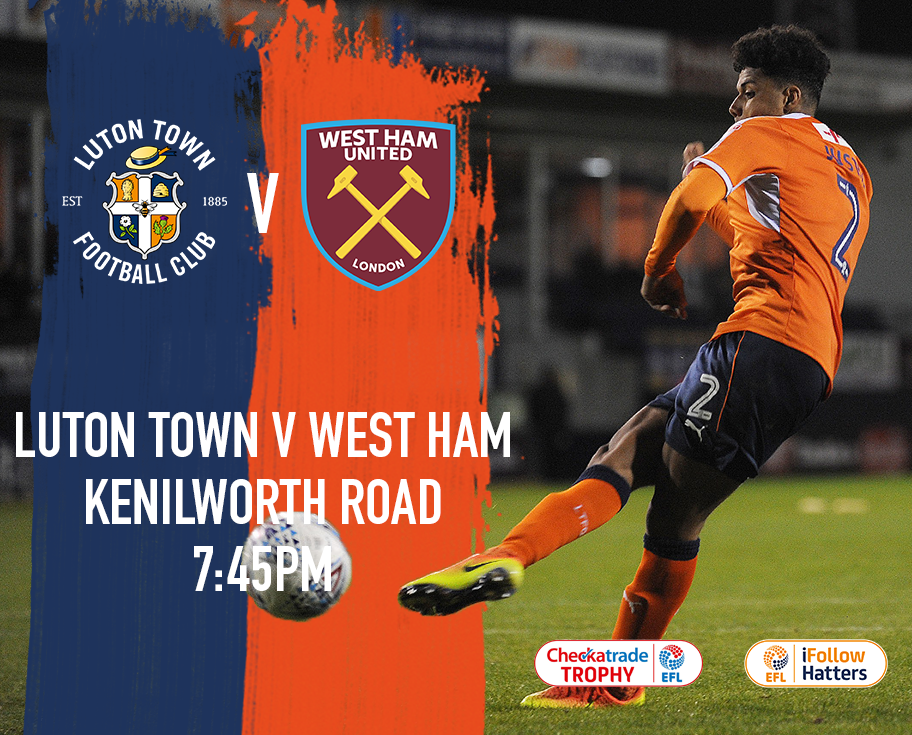 Terry Westley took his West Ham United Under 21’s side to Kenilworth Road tonight for a chance to win a place in the last 16 of the Checkatrade Trophy. We were up against a Luton Town side who currently sit top of the League Two table, with an impressive plus 30 goal difference.

It was a trip down memory lane for Westley, who had a brief spell as Luton manager in 1995 but there was no time for sentiment tonight as Westley fielded a strong starting 11. The Hatters have a fine collection of former Hammers including, Dan Potts, Elliot and Olly Lee, Pelly Ruddock and Marek Stech. Although Ruddock was the only if these ex-players to start tonight’s game. Nathan Jones obviously felt able to rest some of the stars of this years’ successful campaign, for this Tuesday night fixture under the lights of a charming, yet tired, Kenilworth Road.

The game started well, with an open style, however Luton had more of the early chances and began pressing, their perseverance paid off in the 28th minute, when Lawson D’Ath scored the first for the Hatters. We picked ourselves up and finished the first 45 with a good free kick from Domingos Quina, tipped over the bar by the Luton keeper, leading to a couple of corners and a strong finish to the half.

There was a lively start to the second half with West Ham going close, with a couple of well taken corners from Haksabanovic and a saved effort from Martinez. We started to believe that we had a chance to get back in the game. Unfortunately, it wasn’t to be our night, as Aaron Jarvis scored a second for the Hatters, followed by a third from Kavan Cotter, scoring his first professional goal. The 108 travelling West Ham fans kept themselves amused during the second half by ribbing the opposing keeper, James Shea, with amusing shouts of ‘you’re Shea, ahh’ which certainly drew a smile or two. Sadly, that was about all we had to smile about, as in injury time, after an embarrassing blunder by our keeper Nathan Trott, Jordan Cook scored, to end the game with a flattering 4-0 score line and giving West Ham United U21’s their 5th defeat in a row.

I have to admit, I was really looking forward to a chance to see the much-hyped Martinez, in the flesh, and after being named on the bench at the weekend, Ben Johnson, at right back was another player I was keen to get a glimpse of. I was hoping to see some flashes of brilliance tonight and although there were some sparks, no one lit up the pitch for us this evening. Unfortunately, Martinez was well marked by Luton’s number 39 Famewo, and was kept quiet for large spells of the game. Quina, Samuelsen, Haksabanovic and Powell all had positive spells, but based on that performance I don’t think any of those looked Premier League ready.

A quick nod to Samuelsen and Martinez, who came over and shook hands with the travelling fans after the game. A nice touch, given the poor display from the team tonight.

All in all, a cold, disappointing night for the West Ham players and for those who travelled to watch. A game to forget for us, let’s hope the team can turn around this bad run and show some of the form they were showing earlier in the season. Best of luck to the Hatters in the next round.