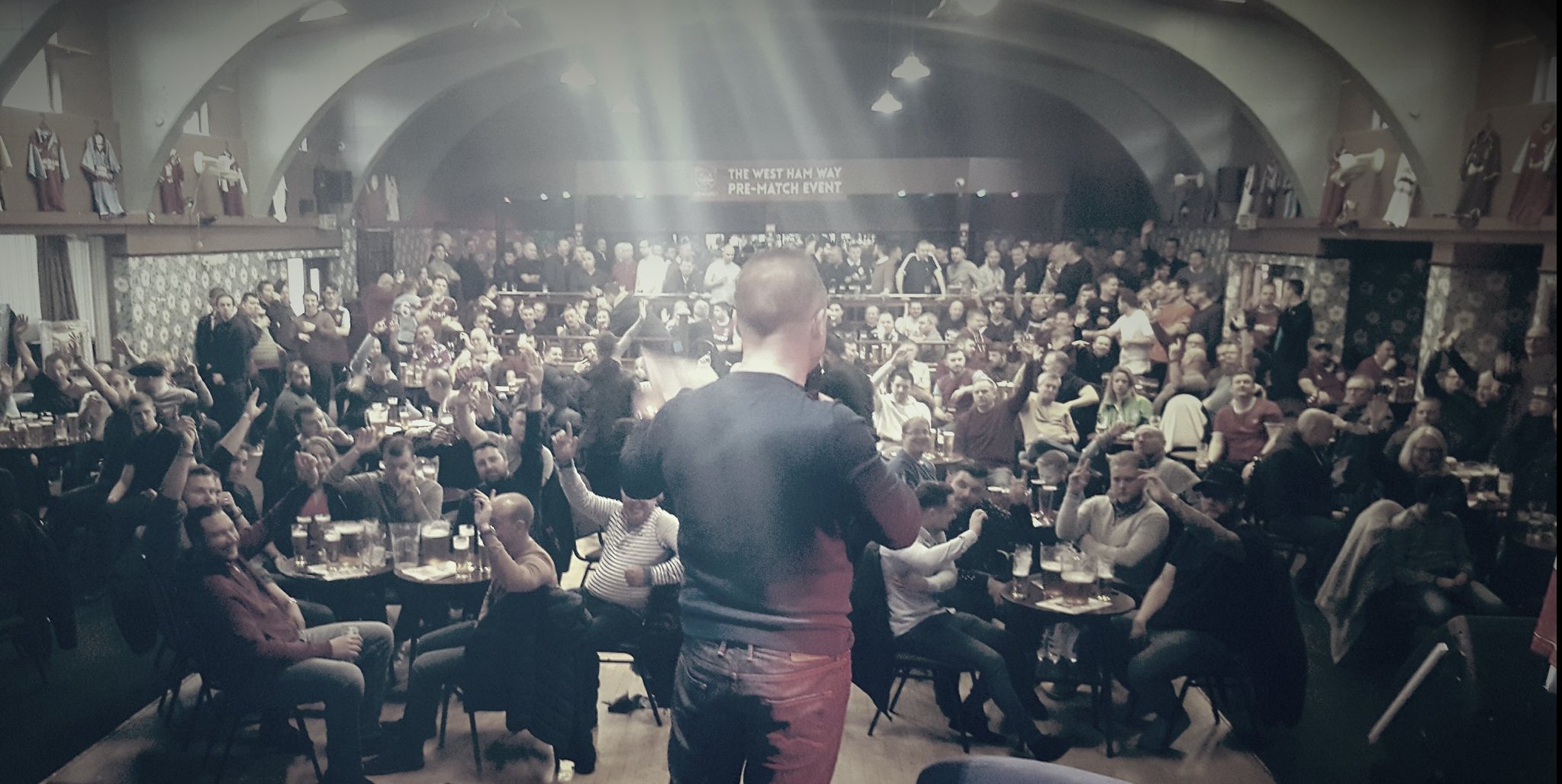 Saturday morning finally arrived….Match Day…Newcastle at Home…could it be 3 points? The team were fresh off a good league run but had stuttered at Arsenal in the Cup and the fan discontent had reared its head again! No matter to me…I was heading to the East Ham Working Men’s Club to firstly represent PitchDMM our new Fan Engagement App and secondly get up for the match with nearly 300 other likeminded West Ham fans at the WestHamWay’s pre-match event.

I hadn’t been back to the Boleyn area since the final game and didn’t know what to expect; everything looked and even smelled the same. Then you see the concrete frame of the new flats where our home once stood and it hits you that it isn’t the same….far from it! I walked in to the Working Men’s Club greeted by a smiling owner and great memories of past games came flooding back….the Ogbonna header against Liverpool especially! This last WHU bastion hadn’t changed at all and as the Pitch Team got in to the main bar upstairs the West Ham feel really hit. Ex and Dave had the room decorated with West Ham everything….Claret and Blue almost welcoming us with a hug! It struck me that the guys at TheWestHamWay pre-match events were doing great things for this Working Mens Club but also we hoped that it might be enough to keep the old institution going.

Fans started rocking up at 10:30 ready for an 11am start and the match day feel really kicked in. We were introduced to Mark Ward and his handshake told you all you needed to know about what Left Backs back in the day were up against. The event kicked off with a buzzing atmosphere…Wardy kindly introduced myself and I attempted to tell the crowd about the revolutionary new PitchDMM App.   I hope my droning on didn’t lose Ex and Dave too many customers! The App was well received and we saw a cracking response by way of downloads; if you’re reading this but not on the App download it for free now…unceremonious plug there!

Mark Ward really struck me as a brilliant MC and held the baying crowd brilliantly with stories of kicking Julian Dicks around the training pitch. Jack Collison came on to raptures…firmly a fan favourite forever I am sure and it’s great to see him returning to the club as a coach. It was a hugely entertaining Q&A with laughter, realisation that Jack’s career had been cut so brutally short. Nobes turning his room over on his first outing with the first team; Manager Zola being the best player at the club and his determination to keep coming back even in the darkest of days. He then spent longer than he needed to making sure that every fan that wanted one had their picture with him or that signature that will be cherished so much.

Coaches left for the OS at 2pm on the dot with every fan in fine voice….Arthur Masuaku whoaaaa ay oh….he never gives the ball awaaaay! Sadly the team failed to get the memo that we needed 3 points to go in to Christmas with but in typical form we’ll be back for the next one! If you’ve not been then these pre-match events are well worth the £25 with the Q&A….free beer and coach to the ground…get involved!