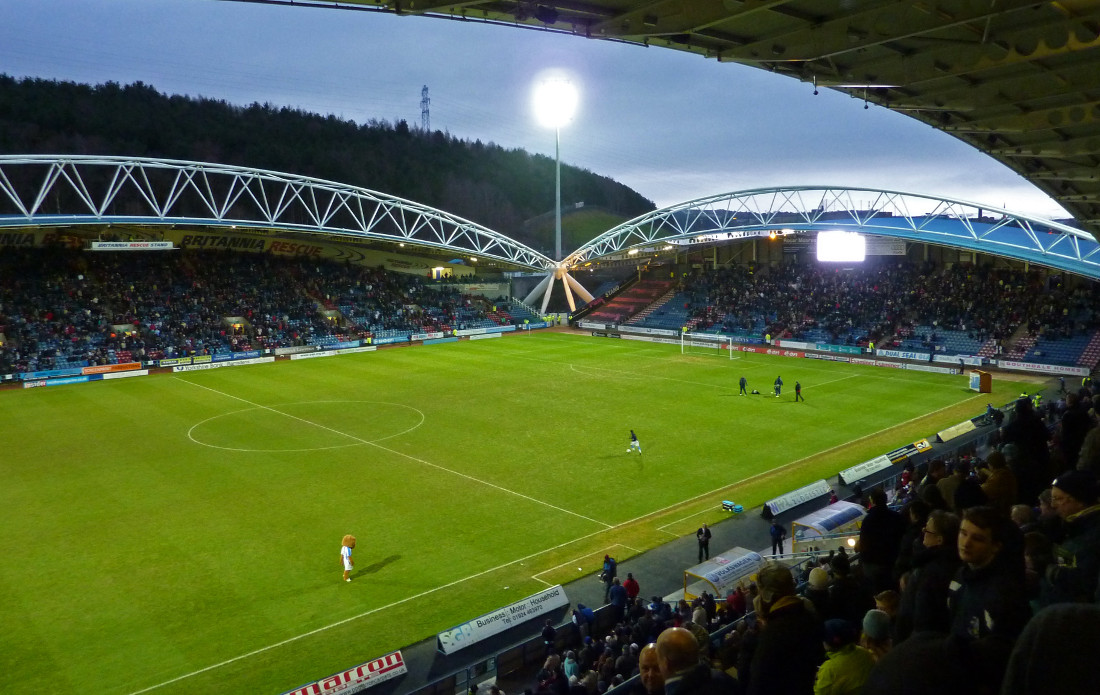 1 loss in 8 but only a handful of those games have been convincing. Our game against Shrewsbury wasn’t the most thrilling, the only positive is that Moyes seems to be giving the youth a chance and trying out different players. A win against Huddersfield could be vital in our survival bid.

The stadiums stands are rather unique in the fact that they are circular rather than square/rectangle, and the stadium is named after beer for sponsorship reasons. The ground has won many awards for its architecture and design.

Away fans are located in the Chadwick Lawrence stand at the south of the stadium. The facilities and view of the pitch are both good, as well as the acoustics so the away fans can make a lot of noise (something we’re good at in particular, regardless of the ground).

The Stadium is just off the A62 Leeds Road. The easiest way to get to it is from Junction 25 of the M62. Just follow the signs for Huddersfield and you will see the stadium on the left.

When coming from the south, leave the M1 at Jct 38 and take the A637, then the A642 into Huddersfield. As you come towards the town centre keep in the right-hand lane as you need to turn right on the roundabout. The stadium is a short distance down the A62.

Along St Andrews Road there are some small businesses that allow you to park there for £5. To find them, as you approach the town centre you will see a Lidl on your left. Go through the next set of lights and after a KFC and Iceland on your right, go into the right-hand lane and turn right at the next lights into St Andrews Road. If you keep going straight along the road you will see the stadium on the right. There is parking at the stadium for £6. If you’re looking at going to a pub, there is one called the Gas Club on Gasworks Street which is a 5-10 minute walk from the stadium, they offer parking for £6. More on the alcohol later.

Behind the North Stand there is a cinema and entertainment area which contains a bar called Rope Walk Grill & Bar which also provides food. It holds both home and away fans, and some locals who are happy to talk about football.

The Gas Club on Gasworks Street (5-10 minute walk from the stadium) is available, it charges £2 on entry and holds both home and away fans. As previously mentioned, you can park in their car park for £6. After the match, this club is for home fans only.

As always keep safe and support our boys. Really hoping for a good result here! Come On You Irons! -@CraigPodevin