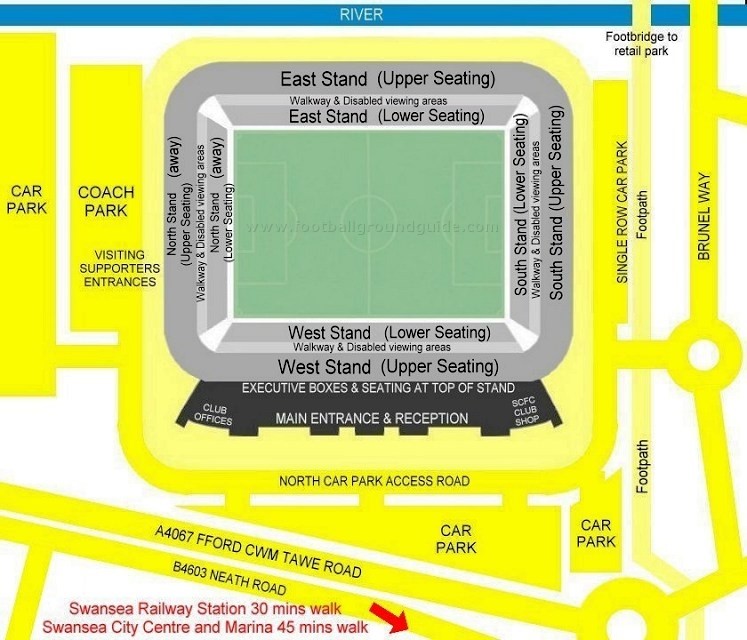 We come up against a Swansea side in fairly good form, they’ve been transformed under their new manager and have picked up more points under him than the whole season before he joined. Arnautovic showed his confidence is still very high with some of his attempts against Liverpool, and the fact we got a goal is a positive (I suppose!). Let’s hope for 3 points in this vital fixture.

The Liberty Stadium is a fairly new stadium, opening in 2005 at a mere £27million. It’s shared with the Ospreys Rugby Union Club. Outside the stadium in the south-west corner is a statue of Swansea legend Ivor Allchurch.

The closest station is Swansea Railway station on the main line route from London Paddington, but is about a 2 mile walk to the stadium. The local bus service (4, 4a, 120, 122, 125, 132) run regularly and a taxi will cost about £6. After the match, there is a bus service run by the club to take fans back to the station which is signed as ‘Town Centre’, this costs £1.50.

The drive from the Olympic Park in Stratford is 3 hours and 54 minutes via the M4 (this does include toll roads). It is advised to follow your sat nav with the postcode mentioned above (SA1 2FA). Alternative routes include going via the M4 and A40 which will take 4 hours and 14 minutes. The club are also running a coach service, which it would be advisable to have booked to take the strain off you.

As expected, most of the parking around the stadium is for resident permit holders only. Away mini-buses and coaches can park behind the North Stand, where you will be sitting, in a fenced off area at a cost of £20 for a coach or £10 for a mini-bus. It’s recommended to avoid the nearby retail park as you could end up with a ticket or clamped.

There is a park and ride facility located at Felindre old steel works site. This appears on signs off Junction 46 shortly after leaving the M4. It costs £6 to park there per car and away supporters have dedicated buses to and from the stadium. Buses wait after the game to take you back to your car.

Due to being located close to a retail park, there is a Harvester and Frankie & Benny’s located just outside and a couple of pubs at nearby Llangyfeleach Road. Some pubs are mixed fans, but it is reported that the fans are friendly enough to chat with and mingle with (don’t take my word for it!). The Railway Inn on Siloh Road should be avoided by away fans, however. Carling and Worthington bitter are served within the stadium, which opens 90 minutes before kick-off so that you have the option to eat or drink within the stadium rather than outside.

Be safe, enjoy your day in Wales and support the boys!