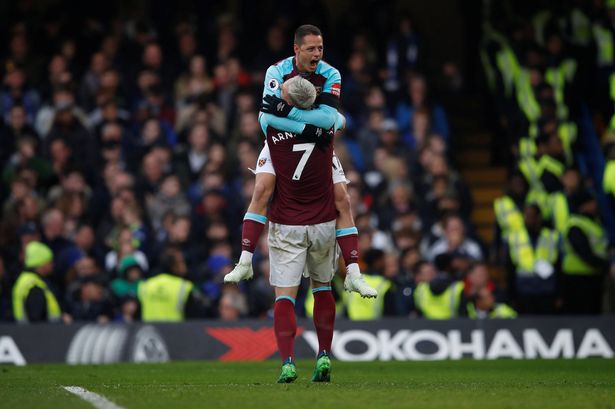 A second half goal by Javier Hernandez earned West Ham a much needed away point today as the Hammers traveled to Stamford Bridge for a Premier League London Derby on a rainy Sunday afternoon in East London. The equaliser coming after a first half Cesar Azpilicueta goal from a poorly defended Chelsea corner kick gave the hosts the early lead.

For West Ham, they began their day still firmly in the bottom half of the table and watching many of their fellow relegation threatened peers secure at least a point in a busy Saturday for the bottom clubs. The Hammer’s remaining schedule features a number of top six opponents and between the success of the Southampton win and the embarrassment of the Burnley defeat, one never really knows which team will turn up on match day.
For most of the match it was Chelsea on the front foot. They had the margin in overall possession and shots, but West Ham defended well. Joe Hart, reassuming his role as the feature goalkeeper, showed great form today.

Álvaro Morata had not one but two goals disallowed for being offside. Willian almost opened the scoring himself as he had another sure goal from short range blocked by Hart. That block set up the corner kick which led to the Chelsea’s only appearance on the score sheet.

The incoming corner kick was headed from Morata across the goal and Azpilicueta had a slow moving volley from five yards out easily find the back of the net with some poor defending from the visiting club.

But other than the one goal, West Ham’s defenders kept Morata and Willian at bay. Later when Pedro and Oliver Giroud were brought on, they too, were held in check by some stout defending from the Claret side.

Moments into the second half, Javier Hernandez was brought on and his stellar scoring history against Chelsea continued. Arnautovic took possession from Cahill and Arnie wisely pulled it back for Chicharito who was positioned in the middle of the area for an easy shot.

With 15 minutes remaining, West Ham took the momentum and had some spirited efforts to take all three points, but by the final minutes of play, they were content to play behind the ball and leave Stamford Bridge with a point.

In the second minute of the stoppage time Hart grabbed a Cahill header, and in the final minute Pedro received a corner but sent his shot over the crossbar. Finally after playing five minutes added time, West Ham’s team and supporters were able to relax and enjoy the hard-earned point.

The Hammers have a bit of a break, as they don’t return to Premier League play until a Monday night match with Stoke City at the London Stadium. Even though West Ham have been inconsistent at home, everyone wants to see Arnautovic continue to torment his former club. A victory Monday night would get West Ham very close to the mythical safety of 40 league points.

With the tight mass of clubs in the relegation side of the table, any separation is important, especially with the challenging set of opponents West Ham must face in the final weeks of this season.

Keep checking TheWestHamWay.co.uk for all our updates on injuries, transfers, and the latest news from @ExWHUemployee .