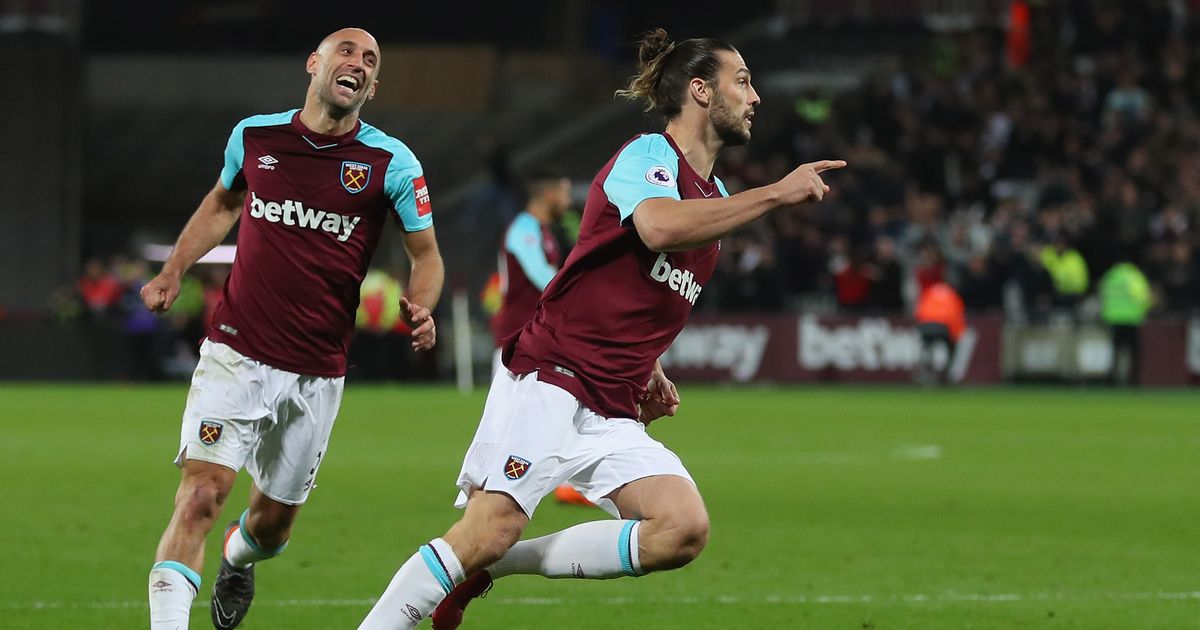 West Ham drew even to Stoke City today, 1-1, in a Premier League match at the London Stadium. It was a match that the host club dominated for most of the match and an opportunistic goal by Peter Crouch late in the second half almost gave the Potters hope of climbing out of their relegation spot. But a very late goal by Andy Carroll brought West Ham back even and while disappointing to the East London crowd, it was a relieving finish to a match that West Ham were predicted to win.

Coming off of a decent run of form over the past two matches, it was assumed that Marco Arnautovic would have another of his tormenting performances against the club that sold him this summer. And he did pay inspired for most of the match. However the defenders from Stoke concentrated on limited his damage. Two goals for West Ham were disallowed due to Arnautovic playing offside.

At the half time break, West Ham had a clear edge in possessions and shots, but the score sheet was still 0-0. In the 70th minute, Paul Lambert brought on Crouch, whose goal was more a gift from Joe Hart’s poor play, than a great strike. Hart, unable to neither collect the earlier shot nor clear it while diving, left it for Crouch’s quick poach. After dominating most aspects of the match, the West Ham supporters were in a panic with Stoke winning with only ten minutes remaining.

To fortify the Hammer’s attack, David Moyes brought on Javier Hernandez, Manuel Lanzini, and Andy Carroll all in the closing moments. In the 90th minute Aaron Cresswell’s cross was played a bit behind Carroll and the big Geordie showed great skill in hooking it and volleying it to the far side of the net, beyond Butland’s reach. Only three minutes of playing time he has seen since early January and Andy Carroll had saved West Ham.

With four minutes of added time, the hosts looked to take all three points and it looked as if they did when Hernandez put it in the back of the net, but the goal was disallowed as a handball was called on Carroll prior to Chicharito taking possession.

The final minute of added time almost shocked the home supporters as Aaron Cresswell looked to earn a penalty, if not saved by an offside call on Stoke. With the final whistle, West Ham added a point to their total and find themselves seven points clear of the bottom three. Stoke City are still in great danger, five points below 17th place Swansea.

Already there have been recriminations of Moyes aligning so conservatively against Stoke City. Certainly, once West Ham subbed on all the attackers in the final ten minutes, they looked the part of a winning side. One could wonder what an extra ten minutes of their help could have meant to the score sheet.

The other observation is how non-creative West Ham was during their many, many set pieces. Both free kicks from just outside the area, and plenty of corner kicks really showed no threat of connecting. With that many attempts one would think at least one would find the back of the net, but strikes into the wall, defenders first to the ball, and other lapses marked West Ham’s set piece play, which was so impressive only two season ago.

On Sunday the Hammers head across London to face Arsenal. With the Gunner’s focus on a Europa League semifinal match later in the week, possibly West Ham could steal some points and give themselves some more space from the bottom three. With the return of Carroll and Lanzini, and Arnie in good form, Moyes has the weapons to give them a good match. Whether he will use them early enough is another matter.