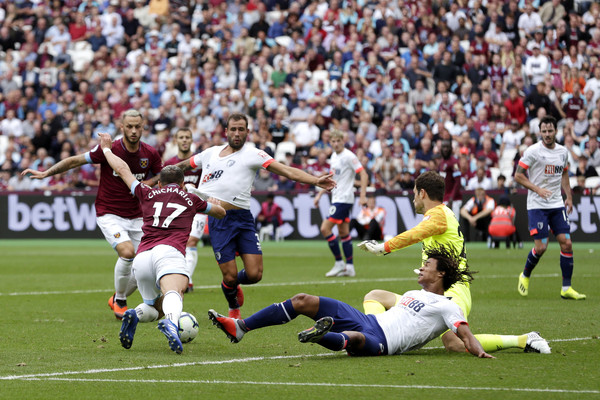 Lukasz Fabianski: Made one superb save from Wilson when the odds were stacked against him, and his low stop from Brooks was also creditable. With this in mind, he might be a tad disappointed with his positioning for the first goal, which resulted in the agonising nutmeg; given the defence in front of him, he’ll certainly have a chance to prove his worth this season. 6/10

Pablo Zabaleta: Given his two performances against the same opposition last season, one could be forgiven for thinking the Argentinian would struggle to deal with Ryan Fraser’s pace, but he looked relatively assured throughout and was unfortunately unable to rectify the mess his nearby centre-half caused for the first goal. Was tireless down the right flank, if a little wasteful when in decent crossing positions, but on this evidence, the veteran will provide new singing Ryan Fredericks with some stiff competition. 6/10

Fabian Balbuena: A nervy first-half performance was followed by a calamitous display in the second period. The Paraguayan was cumbersome in possession and even worse out of it, with his partnership with Ogbonna seeming like an unsuccessful one already. Wilson and Brooks regularly found themselves in acres of space, with the former benefitting from Balbuena’s refusal to close him down despite being supported by three other defenders. On his opening two showings, he clearly needs time to acclimatise to English football, but maybe that should be considered in the form of a different partnership. 2/10

Angelo Ogbonna: A decent opening 45 minutes, in which he made a fantastic block, was undone by a diabolical performance in the second half. Equally culpable with Balbuena for the first goal by his refusal to push up, and his misjudgement of the bouncing ball led to the giveaway of an unnecessary freekick, a mistake which was compounded by his inability to mark Cook from the resulting delivery. His passing currently makes him the more viable option in the centre of defence, but his failure to even look at the ball for the second goal means serious work needs undertaking on the training ground. 3/10

Arthur Masuaku: One of his quieter afternoons from both an attacking and defensive standpoint, but the most noteworthy point was his distinct lack of understanding with Anderson. Overlaps, a key part of a full back’s game, lacked a degree of fluency, and this is surely something that will come with time – and a bit of effort from the winger. Even though he was vastly improved from last week, his lack of end product was still evident today, meaning Aaron Cresswell is surely due for a recall. 4/10

Mark Noble: Much like the rest of the team, a composed first-half display was all but eradicated after a second half in which he was regularly bypassed. His booking towards the end of the first half inhibited his ability to tackle, a point that Eddie Howe brutally exposed in the second half by concentrating his runners through the middle of the pitch. When the team is playing well, the captain is normally at the heart of it, evidenced by an excellent lofted pass to Arnautovic, but his lack of pace is still a flaw that is too easily exposed and, as of yet, not remedied by Pellegrini. 5/10

Jack Wilshere: By far the best player on the pitch in the opening period, with his close control and dribbling ability being of a particularly high quality. Much like his midfield counterpart, his lack of pace was exposed in the second half, but his obvious class on the ball, ranging from simple things like ball retention to neat one-two’s, means he should be the first name on the team-sheet in the midfield; the key for Pellegrini is to find an engine who can accompany Wilshere. 7/10

Robert Snodgrass: A surprise inclusion in the starting line-up, but with his technical ability, he didn’t look out of place. The one thing holding the Scotsman back is his lack of pace, a flaw only heightened by his positioning on the wing, but he retained the ball well for the most part and released Zabaleta on a couple of occasions. With his status as somewhat of a forgotten man at the club, he’s an easy scapegoat for some fans, but there are far greater problems with the squad. Even despite his respectable performance, Yarmolenko is surely in line to start at Arsenal next week. 5/10

Felipe Anderson: The most puzzling performance of the day; rare flashes of talent mixed with a refusal to even attempt to beat his man. His partnership with Masuaku was almost non-existent, with no signs of any meaningful link-up play. His pass which led to the penalty incident was the sole moment of brilliance, but his game-plan was to merely cut back and attempt to swing the ball in. Like any newly recruited player, he need time to settle in, but his failure to run is more a question of work-ethic, and a minimum requirement for a winger in a 442 system. Due to this, it is unknown whether he can provide us with the pace we need; lets hope he runs a bit next week. 3/10

Marko Arnautovic: Back in the goals with a well-dispatched penalty, a relief given the surprising decision to displace Noble as the club’s penalty taker. For too long we’ve been yearning for the Austrian to be paired with Hernandez, and the duo showed there is potential in this partnership with some neat flicks. He caused the visiting backline problems in the first half before fading in the second half, and wasted a couple of opportunities when teammates were perhaps better placed, but he was typically industrious and still our main outlet. 6/10

Javier Hernandez: Much like his striker partner, he was dangerous in the first half before waning later on, but this was more a consequence of the team’s performance. Initially it was tough to work out where he was playing, but his surprisingly good hold-up play and fantastic movement was there for all to see. With some tactical tinkering, Chicharito could be excellent this season, but given the awful defence that’s behind him, his work could be in vain. 6/10

Carlos Sanchez: Perhaps should have been brought on sooner given Noble’s cautioning, with the Colombian managing to up the tempo in the final few minutes; one envisages a starting berth lies in wait for next week’s game. 6/10

Andriy Yarmolenko: Showed flashes of what he offers in the cameo that he had, almost setting up Arnautovic with a lovely lofted ball. Yet to see the Ukrainian for any substantial length of time, but he shouldn’t have to wait too long for his full-debut. 6/10

Lucas Perez: The quietest of the replacements, but he managed to provide Wilshere an opportunity with a nice lay-off. Hard to judge on this, but hopefully he returns to haunt his old club next weekend. 5/10