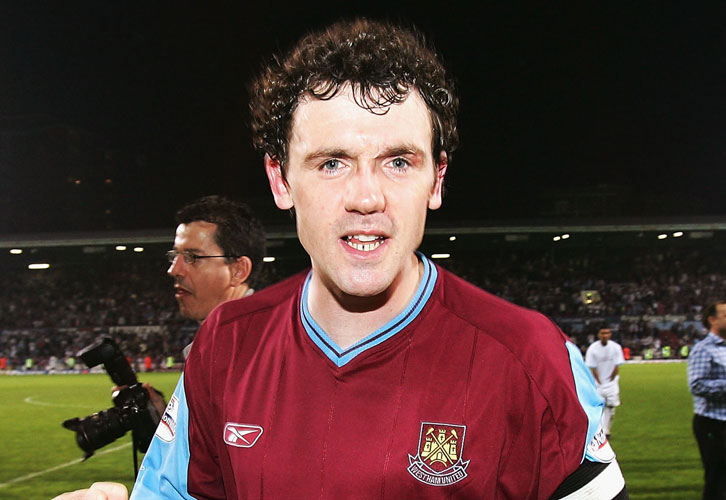 The West Ham Way Pre-Match Event guest for the Tottenham game was a cult hero and former West Ham defender whose football chant will last a lifetime– the one and only Christian Dailly.

The determined and likeable defender came to West Ham United in 2001 for £1.7million. His first year was an incredible one for the club, but he went through a roller coaster ride in East London, with relegation in 2003, and then promotion and near FA Cup glory in 2005 and 2006 respectively. Under new management, he saw greatly reduced playing time and was eventually loaned to Southampton before moving to Rangers in January 2008 – a sad day for curly-hair aficionados in East London.

It’s a nice memory for Dailly when he talks about his move to the club. He was set to move to Everton when then-West Ham manager Harry Redknapp intervened. “There was always something about West Ham,” says Dailly. “So when I got the chance to sign – that was it!”

It was a good experience for Dailly to play under Redknapp’s stewardship. “He liked complete freedom, to go express yourself. You think at times, could he have been slightly more organised? Disciplined? But it was a great time to play football, and one of the most enjoyable periods I’ve had.”

It was an enjoyable period for West Ham fans, too. As well as having a cult classic song to sing, in Dailly’s first year at the club, the Hammers finished 7th in the league in 2001/02 – a position which has since been matched once, but not beaten.

“At the time, I thought we should have been better – it was frustrating – but looking back now, no one has finished higher.”

Of course, fortunes then changed, and this same team was relegated the following season – so what went wrong? For Dailly, it was the wrong kind of changes to the squad which did the damage. “Players were brought in to improve the side, but they didn’t. The dynamic changed a bit; I found myself not playing and I felt that never should have happened.”

In his time at West Ham, Dailly played under a quite a few managers on a heavy rotation (Redknapp, Roeder, Brooking, Pardew and Curbishley), but it was caretaker manager Sir Trevor who made a tremendous impact on the Scottish defender. “I was in Sir Trevor’s office every single day he was there, begging him to take the job,” he says.

Dailly retired in 2012, but he’s in noticeably outstanding shape. When asked by the audience how he’s managed to get so muscular post-West Ham, he laughs. “I look after myself! When I finished playing, I did a sports science degree. People think of me as a crap footballer, but I was an excellent athlete!”

Dailly is a much loved-part of West Ham’s culture, and the affinity fans have for him is evident every time the Christian Dailly song breaks out – which it does. Many times. He’s asked if he ever took anyone up on their offer to shag their wife, and it’s a straight no from the family man.

He’s a player who cares very much for the club, and values the time he spent there. He’s positive about this season, singing the praises of Declan Rice and trusts in Pellegrini, saying he “definitely has an idea of what to do. I’m quite optimistic! But you know West Ham, there’s always something stopping us from being where we want to be, and it’s frustrating.” True words from a man who really does understand the West Ham Way.

When asked at the end of the event how he wants to be remembered by fans, he has to wait for a few verses of his song die out, and he’s got a rather somber response, saying “I think the fans appreciate that I gave my lot and I was sad when I had to leave, as I never did what I really hoped to do.”

Christian took us to a high league finish, making loads of memories in the process. He was a likable player, and as fans, we always appreciated that he turned up and did his best – and he did more for the club and the fans than he perhaps realises.