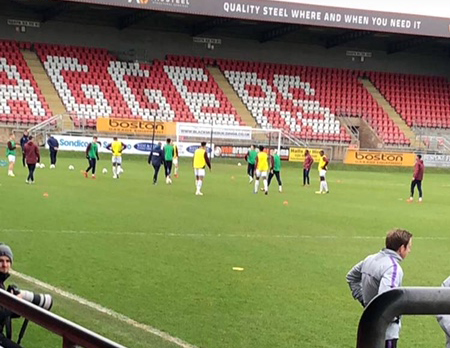 After a terrific performance and win against Manchester City, morale was high for the U23s as they came out up for the challenge of London derby against Spurs on Sunday. Back in the starting XI was Nathan Holland, who has been plagued with injury this season, and the captain’s armband was worn by Conor Coventry.

The match started very pacy with the ball going end to end and West Ham were unlucky not to be ahead after two minutes when Powell’s header from a Johnson cross was held by the keeper.  Within two minutes Spurs came close and hit the post, but the attempt was ruled off side.

A couple of other chances for the Hammers from Kemp and Hector-Ingram came to nothing, but other than those, it was a relatively quiet 20 minutes with some good displays of passing amongst the midfield. Not much divided the teams until Hector-Ingram was pulled down in the box on 25 mins, which resulted in a penalty. With his usual coolness, Powell stepped up to take the spot kick.

Shortly after, a scrappy minute in the box led to an easy tap-in for Spurs against the run of play. Pask cleared the initial threat but it was straight back in, 1-1.

Powell was fouled in a reckless tackle on 36 mins, resulting in Eyoma being booked. Powell took the free kick, which was headed out by Spurs straight back to him and his subsequent shot went just wide.

On 40 mins, Spurs were also awarded a penalty following a foul by Coventry in the area. Diving to his left, Anang made a great save from the low strike.

A couple of lively minutes followed for the Hammers when a pacy run down the wing by Kemp led to a Hector-Ingram shot from the edge of the box being saved by the keeper, then Powell had a chance on an almost open goal. Having gathered the ball in the box from the keeper, the angle proved too tight and he opted for the pass to Lewis whose on-target shot was just tipped onto the cross bar by the keeper. Teams left the field level at half time.

Following the break, Holland was replaced by academy player Diallo. Within five minutes of the restart, Johnson had a shot deflected then it was straight to other end where Anang had to make a save from a powerful shot aimed straight at him. Two minutes later he put himself under a bit pressure by taking time to clear a back pass, but he managed to recover – just.

Spurs had the upper hand for the first 20 minutes of the second half until a Hector-Ingram shot got deflected out, was picked up by Kemp and then crossed back in, but Hector-Ingram’s header from it went just wide.

On 65 mins, Hector-Ingram was again fouled but this time it was just outside the box. It was a second bookable offence for Eyoma, who left the field and Spurs were down to 10 men. Powell took the free kick but it hit the last man in the wall. With 15 minutes to go, Lewis was the victim of a nasty challenge resulting in another Spurs booking and Rosa came on for Lewis shortly after.

Final chance for the Hammers from a free kick on the edge of the area, but Powell’s delivery went just over.

A good performance from the U23s. Final score 1-1.