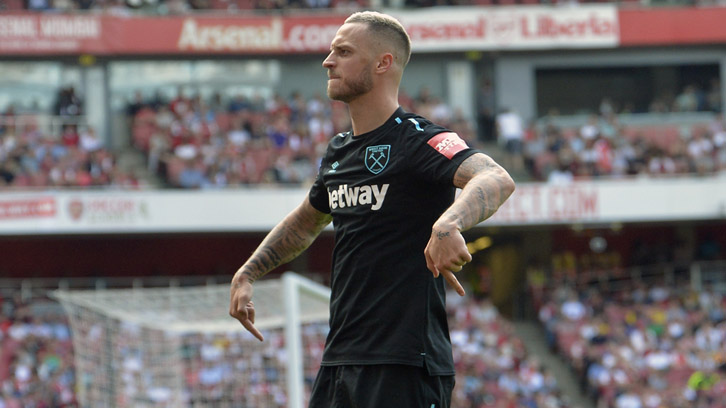 What a result! If only we could have played like that at the start of the season, hey?

Everyone played brilliantly, although this may just be people either playing for their career at their club or angling for a move elsewhere. Regardless, I have been assigned the unenviable task of picking the best three from a fantastic bunch, so here we go!

An obvious pick for Man of the Match if you pay any attention to statistics. Fredericks became the first defender since 2009 to get a 10 rating from WhoScored.com (Thomas Vermaelen vs Blackburn was the last one). Fredericks completed 100% of everything he attempted. 4/4 take-ons, 4/4 tackles, 10/10 aerial duels and he even topped it off with his first Premier League goal. Whilst a flawless performance like that is obviously a one-off occurrence, if he can put together a string of outings anywhere near that level we may just have our starting right-back for next season.

A name I, nor anyone, expected to see on a list like this since January. Yet, here he is. The maverick himself has decided that he wants to start playing again, but is that because he wants to fight for his future? I doubt it. It is more likely that he is trying to entice European suitors into taking a gamble on him. However, whatever his intentions were on Saturday, it made for one quality performance! The second goal may have been the result of poor goalkeeping with a sprinkle of luck; the first was a cool, composed finish. Arnie’s all-round performance was better than it has been recently, although he is not at his best that we saw last season. But, Arnautovic did show exactly why he has the potential to be a top striker, but whether that is to be for us or another side next season only time will tell.

Now this was a tough one. My heart said Mark Noble, who played a lovely pass for the opener and was a standout performer for the second week in a row, whilst, his partner in midfield Pedro Obiang put in the best performance we have seen from him in over 2 seasons. However, I’ve opted for Masuaku. I, even if many others disagree, have always believed he is a better left-back than Aaron Cresswell. And in the past two weeks, this has been shown to be true. His defensive skills are underrated, whilst his attacking talent and flair is always on show for everyone to see. It was his cross that resulted in Arnautovic’s second goal and he was part of a backline that has kept consecutive clean sheets in the league for the first time since May 2018. His pass success was 86%, showing how much of an asset he is in Pellegrini’s search to create a possession-based side. If Masuaku can play this well consistently, I have no issue with him and Fredericks starting either side of Diop and Balbuena next season.