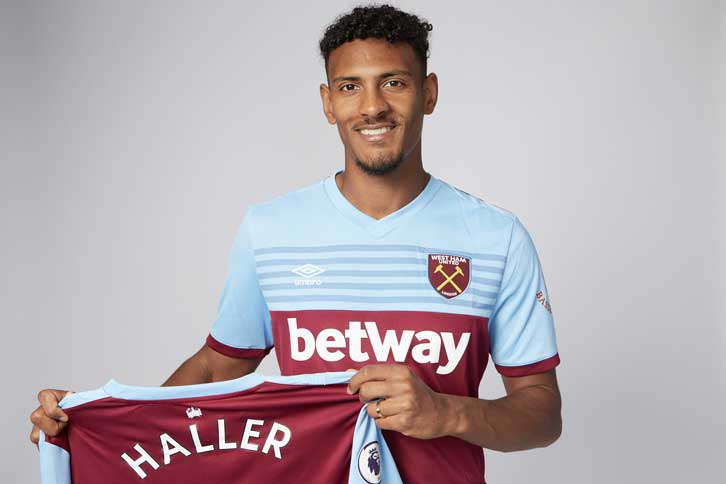 Sebastien Haller is brilliant, isn’t he? He may have only made two appearances so far but £45 Million is already looking like a real coup. Here’s just a few reasons why Haller is the real deal.

In terms of his playing style, Haller is an unorthodox target man. While his size, strength and aerial prowess may remind you of Andy Carroll, he actually prefers the ball at his feet, not in the air. His first touch is immaculate, and he always looks to bring others into the game, as shown by his nine league assists last year. In contrast, our most last term was five (Noble and Snodgrass). He has attempted a number of neat flicks in his minutes so far and while they have not always come off, they are promising. With Lanzini and Anderson acting as inside forwards either side of Haller, he could be the catalyst in great seasons for the triumvirate.

Not only is Haller a brilliant creator, he is a proven goal scorer too. Last season he grabbed 15 league goals in 23 starts for Frankfurt, an impressive return considering he was playing in a front two. In the Europa League he scored 5 in 10 matches, proving he can also perform on the bigger stage as Frankfurt made the semi-finals. And most importantly, Haller is off the mark for us too! His brace against Watford was nothing spectacular, and I expect plenty more from him, but it always good for a record signing to hit the ground running. Confidence plays a huge part in football and Haller will be happy to get his first goals for the club.

His ability to play in a two is also very exciting. Manuel Pellegrini has dabbled with a 4-4-2 during his time at West Ham, but Arnautovic really struggled in this system. It worked a lot better when Chicharito was partnered with a powerful forward, usually Michail Antonio. Haller offers a dual role in front two, able to drop deep and act as the French Connection in transition, or the focal point and goal scorer. Haller would be capable of playing either of Antonio or Hernandez’s role in the formation; therefore his versatility means we could see this tactic resurface at some point this year.

What I really like about Haller, other than his on-pitch talent, is his personality off the pitch. He seems to have fit in with the squad extremely well and also understood the ethos of the club too. Following the win over Newport in the Carabao Cup, Haller posted a photo on his Instagram story of Jack Wilshere, congratulating him on his goal. Plus, despite not playing a single minute versus the Welsh side, he put out a tweet the morning after thanking the fans for their support. The fans love him, and he loves the fans. It seems Haller has definitely bought into the values of West Ham United.

Funnily enough, I touted Haller as the heir to Arnautovic’s tainted throne as West Ham’s talisman in my first ever article for the website. Sebastien Haller really is the key to any success we will have this season, deployed correctly and he is a danger to any defence. We could be in for a great season if our new star keeps up his early form. Hopefully at the end of the year we will all be shouting Haller-lujah!