The following article is purely satirical and not one iota of it should be taken seriously. 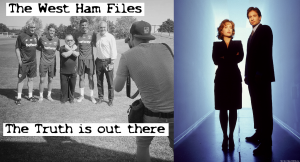 An interesting new case has arrived on Agent Mulder’s desk this afternoon surrounding potential paranormal phenomenon in Britain surrounding a Premier League football team. With the owners claiming that West Ham United has once again haemorrhaged money following the spending last summer by the last manager and now have no funds for the new season, despite being in the top 20 list of clubs in Europe and their owners moving them to a taxpayer funded stadium which they publicly claimed would ensure they no longer suffer financial hardship. Agent Scully suggests it could be a manor of things, such as financial mismanagement, saving to buy the stadium or just spin from the owners to try and temper fan expectations, but Agent Mulder insists on investigating potential paranormal activity at the stadium and training grounds nonetheless.

The agents begin their investigation trying to trace the events of last summer. The image in the header of this article mystifies them. “If these signings were poor, why is one of the owners proudly showing them off?” Scully ponders, cynically. Mulder is more interested in the man on the far left, Manuel Pellegrini. Did he have some supernatural powers to force David Sullivan to celebrate his manager signing players he wasn’t responsible for? Who is this distant Mario Husillos figure, where did he figure in the shady dealings? Were they onto extra-terrestrials in the world of English football, hidden in plain sight? Easy to track down, a quick meeting was arranged and revealed all. It turned out they were just mere mortals. Pellegrini, playing the role of the smoking man, suggested that to find the truth they should look over the scouting reports and transfers under their tenure. Mulder inspected the facilities, as Scully followed up their tip.

Inspections of the training ground only furthers Mulder’s suspicions that all is not what it appears to be. “The owners, they claimed to have state of the art facilities, and spent millions on this place.” He muses out loud whilst standing in the porter cabin. Were malevolent forces morphing the clubs very infrastructure, reminiscent of a voodoo curse? Injuries had plagued the team for years. He discovers a voodoo doll with “Wilshire 19” carved into its back on the floor of the medical department. Spooked, he continued to the ground. The stadium promised by Chairwoman Karren Brady as “World class” was soulless and he felt himself getting more and more distant from the venue the more he explored. Could this have been built on an Indian burial ground? Results had been poor since they started playing here after steady progress at their old ground. “I want to believe” he cried out across the empty stadium.

Agent Scully, always the sceptic, investigated the events of the last 4 years. Chasing loose ends over the stadium move, articles in the press from each owner contradicting what was accepted facts, and incoherent tweets from West Ham news sites linking the club with every name under the sun that were only met with ire from the fans. “It’s almost like they had no plan whatsoever other than moving to the stadium” she reported back to Mulder. “And the news around transfers is just a mess. Last summer they claimed to have paid for the majority of Sebastian Haller’s fee up front, yet now are claiming they cannot spend as they still owe most of the fee and have missed the last two payments. Bizarre”.

A meeting with two of the owners proved no more helpful than the sketchy claims about transfer fees. David Gold chuntered on about daylight savings conspiracy theories to Mulder whilst Karren Brady was more interested with sounding out Scully for a role on the apprentice. David Sullivan was conspicuous with his absence, leading Mulder to believe he was abducted by aliens whilst David Gold was being haunted by a demon that stole his shares when he was younger.

Sadly, the team did not get to finish their research as West Ham United suddenly tried to pay their fee in instalments, claiming to offer them the bulk upfront whilst at the same time pay 75% of it over the next 4 seasons with an extra fee if West Ham qualify for Europe. At the last-minute David Sullivan contacts the FBI and asks for them on loan with an option to pay if they can resolve West Ham’s problems. The FBI did not return his call as both Mulder & Scully work pro bono and do not require a fee, but West Ham declare a deal could not be reached for their services and that “They tried”.

Mulder hypothesis a long standing supernatural event is taking place in Stratford, where agent Scully returned stateside to an email from someone going by the name of ‘Mr. A. Grant’ who advised him she was getting too close and that’s why West Ham tanked their involvement, signing off with “The truth is out there, just ask Herita Ilunga.”