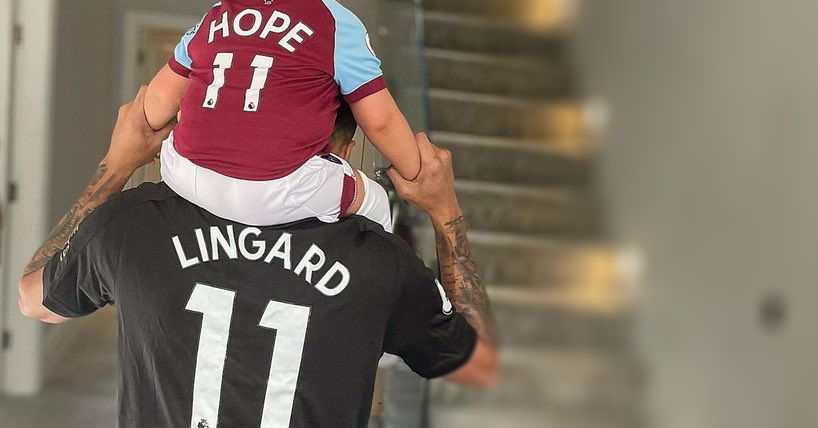 The tricks, clever runs, elaborate long balls and tiktok worthy celebrations give you that warm fuzzy feeling. But unlike those of similar calibre, he doesn’t easily tumble to the floor and fold.

Lingard has been through a lot since he burst on the scene with Manchester United, with that cheeky smile and friendly, cocky swagger that got him in the England team. His gravitational persona means that he has accumulated over four times as many Instagram followers (6.8M) than even the official West Ham United one (1.4M); prepare for him to be tagged in every other Hammers post whilst at the club.

Not all fans are aware that in the past couple of years he’s had to grow up as a family man. When his mum sadly got too ill to look after the family he’s had to step in to look after his tweenage siblings. As well as having a child of his own a couple of years ago, a daughter named ‘Hope’. These personal pressures all whilst under the scrutiny of the world’s press, which could stain anyone. But to shoulder responsibility shows the fabric of his personality to seemingly come through unmarked.

After going through the wringer at his home club and moving to West Ham, most fansites raised questions if he was a load of hot air and mislabelled based on past glories. Was he still the player we remembered or had the match fitness and sharpness faded? Those doubts were answered emphatically on his debut with two goals, an outstanding display and several great performances on the spin – the smile was back on his face and showing a dryer humour than your average footballer, the front-man in the celebration routines. Those doubts quickly evaporated when the same fansites were immediately calling for the trinity of Davids to sign him up!

West Ham had had a taste of the pressure-relieving skills and gloss the Man Utd loanee can give to a hard grafting side. This was highlighted most when he was cup-tied for the FA Cup when a solid defence finally worn down as they had no real outlet against a relentless Red Manchester attack – sometimes it is only through absence when you realise just how valuable an asset is. It’s a wonder as to why he is not in the squad for the Red side of Manchester, seen more as yesterday’s hero and hung out to dry.

This was the player fans have always longed for see when Haller, Anderson, and Jack Wilshere (ironically, the best thing he did was to hide in the laundry as a prank but was never on the pitch long enough to get dirty) signed for the club. The manager cleaned house with those with the wrong mentality, shrinking back and evaporating when the going got tough. Jesse’s loan came at the perfect time, the squad threadbare and needing an injection of his energy and match intelligence.

Lingard can exceed the status that Payet, Tevez and Dean Ashton has in fans’ hearts, bring the heat with that bit of magic but dedicated and passionate.

With his skill and spirit adding that key extra dimension, and hammers fans dreaming of European football, he’s brought more ‘hope’ to the club than just his daughter.