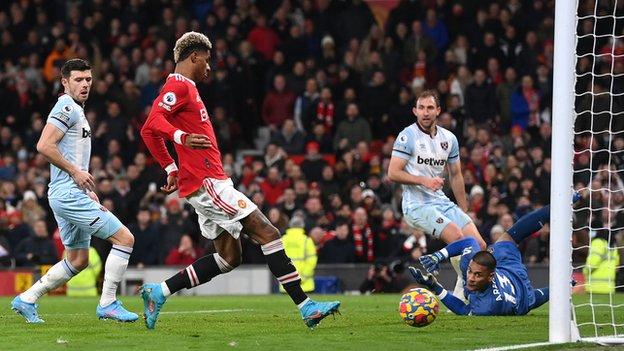 West Ham were once again denied by VAR in a controversial injury time winner against Manchester United with Edison Cavani setting up a goal whilst looking in an offside position.

It capped off a frustrating afternoon for David Moyes on his return to Old Trafford in a game which West Ham fought hard to get something from.

The match offered few chances with Bowen unlucky not to score early on but West Ham were well organised and the hosts never really looked like scoring.

Declan Rice was sublime at times in the middle of the park and certainly felt West Ham were desperately unlucky to walk away without a point.

Tomas Soucek was unlucky not to score 4 minutes from time when his header was wide of the post. It seemed a point was in the bag as Manchester United looked lost in trying to break down our well organised back line.

But it wasn’t to be as in the final seconds Cavani was fed through on goal and squared to Rashford who scored the winner.

The replays seemed to show that Cavani was offside however a rather rushed VAR checked deemed it fair, however this felt very harsh considering the decisions that have been called so far this season.

Harsh on our Irons who deserved a point from this game without a doubt, but the break now presents a time to regroup and go again, hopefully with some new faces too.