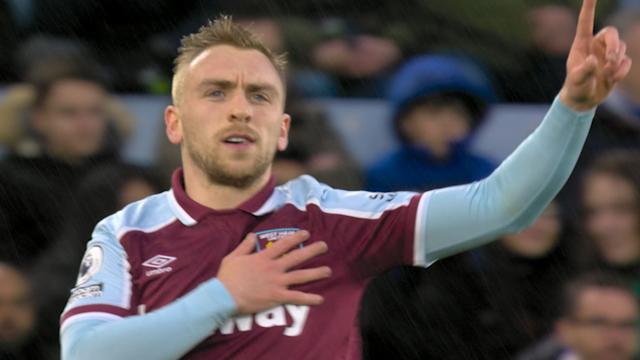 Craig Dawson snatched an injury time leveller in a 2-2 draw against Leicester City in what was a frustrating evening which arguably West Ham gifted the home side.

There was an anxiety in the atmosphere for the home side and early on with West Ham’s play it would be a situation we could take advantage of, which on just 10 minutes we did.

Issa Diop, in as a last minute change for Kurt Zouma due to illness, played a long through ball which the in form Jarrod Bowen latched on to which he smashed home beyond Kasper Schmeichel.

It was once again another strong message to Gareth Southgate that Bowen should surely be in the next England squad.

West Ham continued to dictate the play and although not creating more clear cut chances, it was felt we would get to half time comfortably, however things took a bizarre turn for the worst.

Right on the 45 minute mark Leicester swung in a corner which Aaron Cresswell stuck out his arm due to misjudging his header which resulted in the referee pointing to the spot.

Tielemens scored the resulting penalty which gave the home side a lift right at the break, which was simply a gift which David Moyes handed to Leicester which was thoroughly undeserved.

The second half was then the polar opposite of the first, with Brendan Rodgers’ side dominating play and West Ham simply second best all over the pitch.

It wasn’t long until the home side were rewarded for their dominance and were ahead on 57 minutes with Ricardo Pereira heading beyond Fabianski to create a sense this was not going to be our day.

David Moyes’ Irons struggled to mount a serious challenge with some key players not at their best, and it was clear changes were needed to get back into this.

Fredericks, Benrahma and Vlasic were introduced which created a renewed energy in the side to start mounting a challenge to level things up.

Chances were starting to arrive with Benrahma unlucky with a long distance strike but in injury time we somehow managed to break Leicester City hearts.

Jarrod Bowen swung in a corner which Craig Dawson bundled in to send the visiting fans wild. Although a frustrating game it was very welcome leveller which for the majority did not seem likely.

It may be a case of 2 points dropped, but ultimately the last minute leveller could prove vital as our Hammers hold firm to 4th spot.