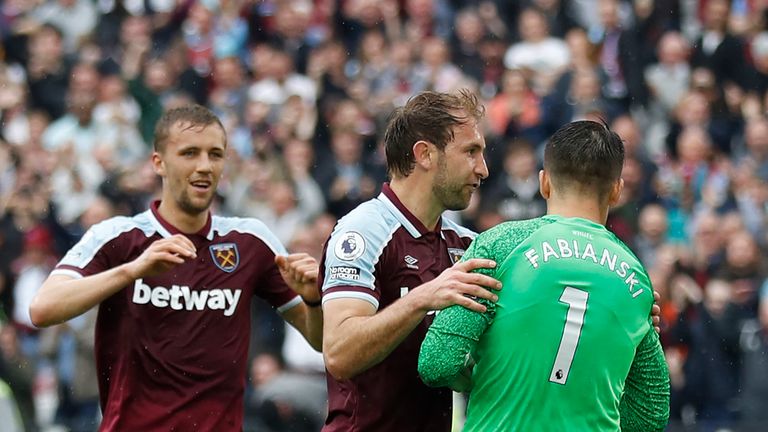 West Ham gained an incredibly hard fought point against Manchester City to secure a top 7 finish in the Premier League.

It is the first time in the clubs history that European football has been secured by league position in consecutive seasons, highlighting the incredible achievement reached by Moyes, his staff and players.

On a day with emotions running high in the farewell to our Captain Mark Noble, David Moyes’ side did not disappoint, with a thrilling performance against the league leaders which arguably should have warranted a victory.

As expected, Manchester City dominated the possession, with some slick passing but without being able to penetrate the well organised and focused West Ham defence.

It was clear that the game plan was counter attack minded, with our Hammers always looking a threat when breaking, and Antonio proving to be a handful for the Manchester City defence.

The plan came to fruition on the 24th minute, when Bowen latched onto a clever ball from Fornals to round the City keeper and fire home to send the 60,000 West Ham fans wild.

Despite City wanting to respond fast, West Ham continued to look a threat, and were rewarded again when Bowen weaved to the edge of the box to fire in the bottom corner to give our Irons a 2-0 lead at half time.

Nerves were high in the second half as we needed to keep the visitors at bay in the opening exchanges, but unfortunately, it wasn’t to be. Grealish fired in a deflected shot in the 49th minute to get the Citizens back in the game.

West Ham rallied but Man City continued to dominate possession. Chances were appearing at both ends but sadly it was our Hammers who conceded next, with Coufal heading into his own net on the 69th minute.

Both sides then were going out for the winner, with Man City knowing a victory would all but secure the Premier League crown. Jarrod Bowen went agonisingly close, with a shot that was well block by the City back line.

Then late drama unfolded when the poorly performing referee Anthony Taylor pointed to the spot with 4 minutes remaining after a foul in Jesus.

Up stepped Mahrez, who’s penalty was well saved to send London Stadium wild and secure a well fought point and European football for next season.

The emotions continued after full time as the West Ham fans bid farewell to Mark Noble, who said goodbye to his West Ham family on his final game as a player at home.

A remarkable day for all connected with West Ham and yet again another season we can all be incredibly proud of.