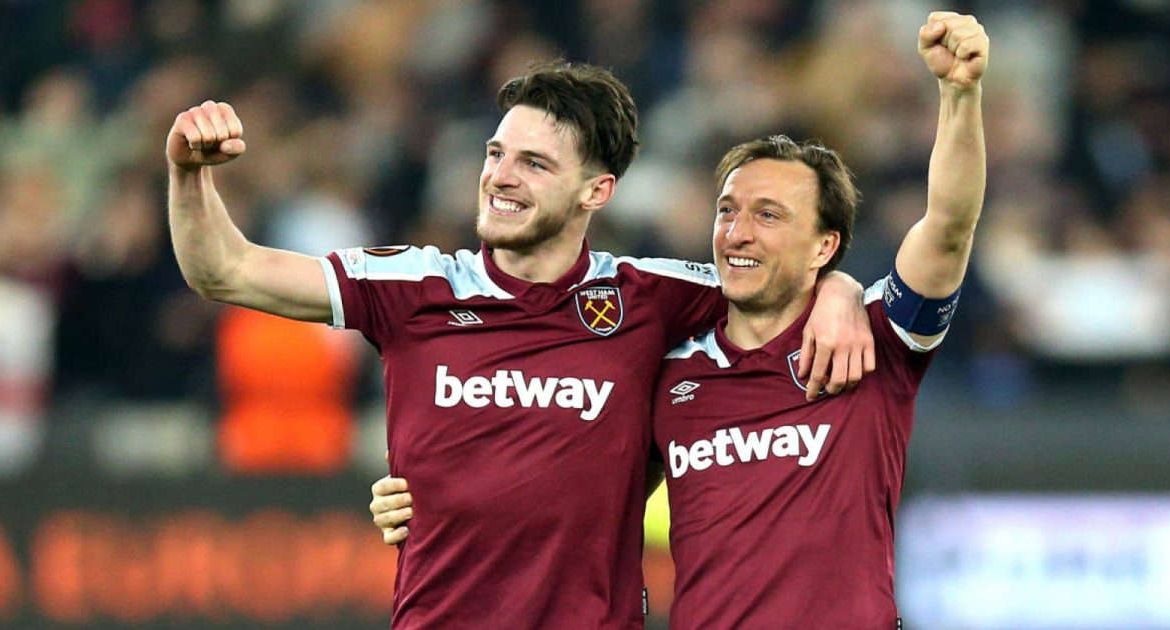 David Moyes has called on Declan Rice to follow in the footsteps of Mark Noble, ahead of our captains final match as a West Ham player this weekend.

It has widely been expected that Rice will be made permanent club captain following Nobles retirement, and Moyes has revealed that he and the staff have been helping nurture Rice into becoming a leader like Noble has been at the club for many years.

It will be another emotional experience this Sunday when Noble hangs up his boots following our huge clash away with Brighton & Hove Albion, and Moyes also had some very kind words to say about his departing captain.

“We keep mentioning to Declan Rice that he should look at Mark Noble and follow how he’s doing and pick up things, because you need to take responsibility, you have to show leadership,” said the Hammers manager. “Mark Noble showed great leadership to our players and to our Club.

“He’s had good times, but he’s had difficult times too. I think when he came on against Sevilla, for example, he was really emotional because of the level of the game and where the Club’s at now.

“The job we have is to drive it on – he has to be part of it, and he will be in the future, I’ve got no doubt about that. But I was pleased because we’ve not brought him on just to say: ‘Here you are Mark, come and get another bit, this is your final season’ – far from it. I’ve brought him on because I think he can help me, and make a difference.

“If you’re a West Ham supporter, you should be incredibly proud of what Mark Noble has done throughout his career for the Club.

“Mark’s always conducted himself incredibly well. I can only tell you that, in the time I’ve had with him, he’s been a great ambassador for the Club. He speaks incredibly highly about West Ham and has sorted out so many small bits when it’s been needed.

“Mark Noble has been a been a great servant to the Club, had a really good career, and, when he goes, he’ll be missed, but we should be thankful for what we’ve had from him.”