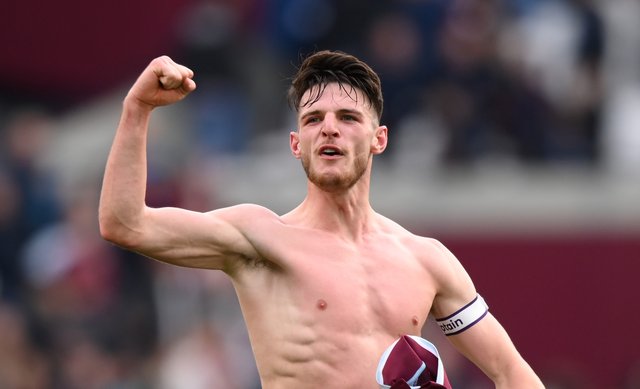 West Ham captain Declan Rice has stated that the club are now ready to push on even further following back-to-back positive seasons.

There is no doubting that West Ham is firmly a club on the up, with European football once again secured following another campaign with the club finishing in the top 7 of the Premier League.

Rice has himself been a key factor in the recent rise in East London, with our Irons beginning to cement ourselves amongst the elite of football clubs across Europe, and the figurehead is not ready to settle and knows there is more to come from David Moyes’ side this season.

“It’s only right now that we keep pushing and aim for even better. There is no point in standing still and being stale.

“West Ham is a massive club and, if we want to compete with the best, we need to keep improving and keep pushing on”

Rice has been rewarded for his displays and leadership qualities by David Moyes, having been handed the captains armband from his mentor and close friend Mark Noble, and the England international couldn’t be more proud.

“It feel like it’s a dream to be the captain of a football club. Any football club, it’s an absolute honour, and now I get to captain West Ham,” admitted Rice.

“When I came into the team five years ago, I would never have thought I would be West Ham Club Captain one day. To take it from Nobes as well, it’s very special.”

The ever growing development of our new captain of course draws speculation surrounding his long term future, with quite rightly many admirers across the football world, but Rice has stressed that its all speculation and his mind is firmly set on being a West Ham player.

“Everyone knows about my relationship with the players here, the manager, and I’ve never once complained. Every time I’ve put on this shirt, I’ve gone out there and given 100 per cent and whatever happens off the pitch can take care of itself.

“I can’t control that but what I can control is trying to go out there and being the best player I can be every time I put on the shirt. For the last couple of seasons that’s what I’ve done and that’s down to the faith the manager has put in me.

“I’ve still got so much to improve on. There are so many more levels to go. I’m only 23 I think people probably get mistaken and think I’m 26 or 27. I’ve played loads of games already, and I’ve had so much so many good experiences.