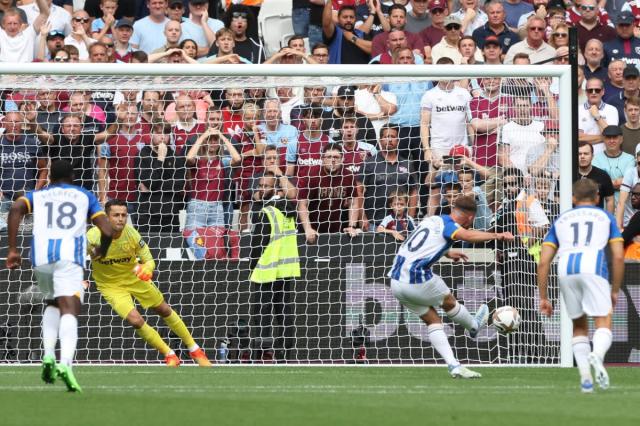 West Ham fell to a 2-0 defeat against Brighton following an abject performance at London Stadium.

The loss leaves West Ham with zero points, zero goals and bottom of the Premier League after 3 matches played, a worrying period of form that David Moyes will want to turn around and fast.

West Ham struggled to break down a well organised and structured Brighton side that outsmarted our Hammers throughout the contest.

The opening exchanges were positive with Moyes’ side looking menacing and playing a high tempo to break the deadlock. However as the half went on Brighton started to take grip of the proceedings and looked very composed on the ball.

Then on the 22nd minute, West Ham were the masters of their own downfall. Zouma gave away the ball in the middle of the park when under no real pressure. Brighton broke and Welbeck was brought down for a penalty by Kehrer, which MacAllister slotted beyond Fabianski.

West Ham tried to regroup but ultimately were second best all over the pitch, as Brighton showcased an aura of authority with our Irons in the mindset to break and grab a goal whenever in possession.

The second half continued in the same fashion as the first, with West Ham eager to score at any given opportunity, and that seemed to play into Brightons hands.

The match was put to bed 20 mins into the second period of play, Leandro Trossard broke and scored another for the visitors and put the nail in the coffin for David Moyes to conclude a miserable afternoon in East London.

West Ham did show signs of a good side in periods and look a team in transition, however the concern is now growing with the club desperate to add further to the squad ahead of a big week in which we could secure Europa Conference League Group Stage qualification and then a must-win trip to Villa Park next Sunday.