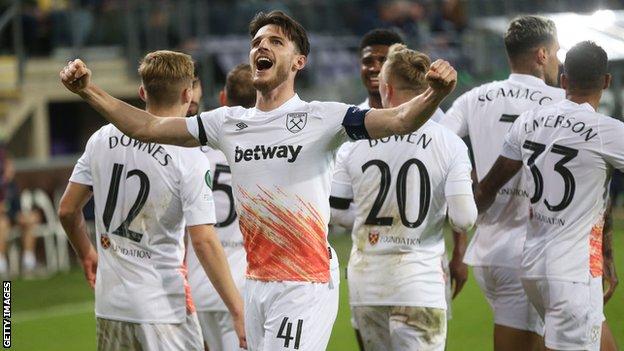 The Hammers have put themselves in pole position to win our Europa Conference League group after an impressive result in Anderlecht. Sid Lambert looks back at the talking points from Belgium. It was a night when our star summer signings sparkled, as another European adventure started to gain momentum. Dare we dream again?

Downes on the way up

A few weeks ago, there were some speculation that Flynn Downes wasn’t progressing at quite the speed his manager expected. Last night Mr Moyes couldn’t have asked for more. Downes was the engine room of the midfield, a Rolls Royce in possession with a range of slick passing that kept West Ham’s motor purring along nicely.

When Declan Rice came on alongside him, the team slipped into another gear. There was an injection of quickness and quality that allowed us to take control of a game which had been an even contest until then.

It would have been easy for Downes to take a back seat and let the likes of Rice, Paqueta and Scamacca dominate proceedings. Instead, he matched them; pass for pass, move for move. It was a performance that belied his tender years. We know all about Downes’ past and his boyhood dream of playing in Claret & Blue. This was a performance that gave us a glimpse of a very bright future.

Our summer signing from Lyon has become an overnight social media sensation thanks to that outrageous moment of skill near the touchline. However, it will be the perfectly weighted pass to set up Scamacca that will most please his manager.

From that moment on, Paqueta was in full-on entertainment mode. The Brazilian has more tricks than a clown’s pocket, and the bench certainly enjoyed what they were seeing.
Sadly, the hectic schedule of European football means there’s little time to look back and enjoy the fun. The relentless fixture calendar rolls on. This Sunday we’re back to the serious business of Premier League points. After conceding four in their last fixture, Fulham will be looking to bolt down the door to goal.

We will need Paqueta’s craft to unlock it. Let’s hope we see more of the same.

In an entertaining and end-to-end game, Alphonse Areola had surprisingly little to do. For all their industry, Anderlecht’s shooting was wildly inaccurate.

Fabio Silva is reportedly one of Portugal’s brightest talents, but his ratio of 4 goals in 54 games at parent club Wolves suggests that he has the same relationship with the net as a stubborn Koi Carp.

Yet when a cross came into the box late on, the youngster made a perfect connection. His header was hard and low, giving Areola precious little time to react. A goal seemed certain.

It is the mark of a great keeper that they can deliver in key moments. Areola’s save was just as important as the contributions further up the pitch. We all know of the manager’s faith in Fabianski, but should that stance ever waver, we have a high-class replacement ready and waiting to seize his opportunity.

When the fourth official held up his board in the second half, it was no surprise to see Said Benrahma get summoned to the sidelines. After the Algerian’s astonishing miss earlier in the game, Moyes had a face like a man who’d just found a melted choc ice in his back pocket. However, it was something of a shock to see the likes of Scamacca, Paqueta and Rice all thrown into the fray.

If there has been one observation of the manager, throughout his career, it has been his safety-first approach to winning football matches. It’s not that he’s risk-averse, but if you told me that Mr Moyes had started a petition to have champagne corks replaced with ring pulls, I wouldn’t find that too far a stretch of the imagination.

Last night, it wouldn’t have been a surprise to see the gaffer settle for a very respectable point and a clean sheet. Instead, armed with strength in depth that he’s never been afforded before, he went for the win. The three new faces galvanised the team and the massed ranks in the away end responded to the new impetus of energy on the pitch.

Though the players will command the headlines, this was a victory for the manager. His bravery in Belgium paid off nicely.