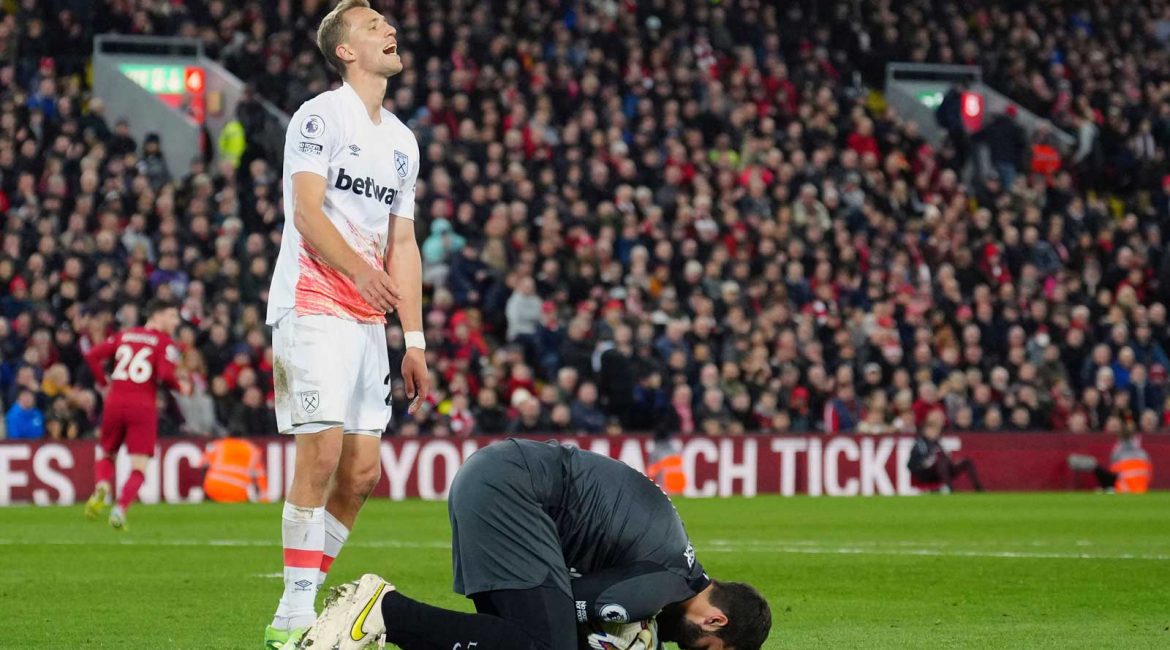 David Moyes was left scratching his head wondering how his West Ham side left Anfield empty handed after a spirited display which deserved more.

A trip to Liverpool is always a daunting task, especially for any Hammers manager with the club recording just one victory against the Reds on their home turf since 1964. A rather embarrassing statistic.

However the performance last night wasn’t anything but embarrassing, with Jurgen Klopp in the full knowledge that his side were incredibly fortunate to walk away with the 3 points after West Ham dominated much of the proceedings, especially in the second half.

It was a typical sluggish start for our Hammers but we grew into the game as it progressed, with some dangerous counter-attack build-up play that caught the eye, but once again the end product was continuously lacking.

Darwin Nunez fired a header against the ground which bounced beyond Fabianski into the corner of the net which was somewhat harsh on West Ham considering this was at the time we were seriously growing into the game.

Our Irons didn’t lie down though, and in fact responded well putting the home side under pressure with some neat football that sadly resulted in much the same with our attackers lacking the ruthless edge when it mattered.

On the stroke of half time though we were rightly awarded a penalty, with Bowen having been fouled in the box. The England forward stepped up and again lacked any real purpose, with a tame penalty that Alison quite easily saved.

The second half arrived and West Ham really stepped up a gear and were the better side throughout. It was felt that an equaliser would arrive at some point with Liverpool looking a side desperate to hold on.

The best of them came to Tomas Soucek in the dying minutes, when a cutback from the once again impressive Said Benrahma fell to the Czech international with the goal at his mercy. He fired at goal but a last ditch tackle from Robertson saw the ball fall just wide of the post to break West Ham hearts.

This will be seen again as another game with points dropped, with Liverpool arguably there for the taking. David Moyes was left a frustrated figure at the end when talking to the press, however he was proud of his sides display and gave a special mention to captain Declan Rice, who once again shone in the middle of the park.

“Disappointed in the end we didn’t come away with something,” admitted Moyes. “We had a real big opportunity to do so but look, we’ve been here a few times now and it’s been the same story. The last few times we’ve been here, it’s been the same thing. I hoped tonight we’d be able to change it but just not quite able to get over the line against them.”

Moyes also gave high praise to Flynn Downes, who made his first Premier League for West Ham, with the signing from Swansea again producing a display that will have everyone taking notice of his clear talents.

“I thought he did really well,” added Moyes. “I’ve had quite a few from the Championship and some have taken six months to be first team players. There’s a lot of things he did well so I’m pleased for him. He’s starting to get noticed now.”