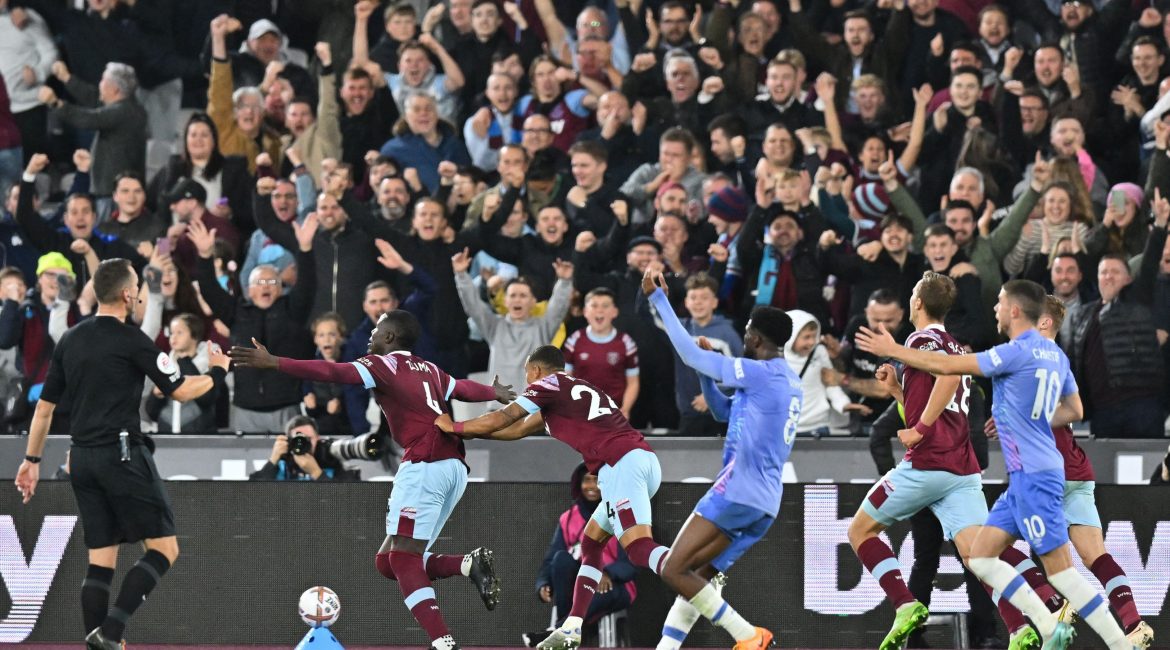 It wasn’t pretty, but David Moyes’ men secured a valuable win over Bournemouth last night at the London Stadium. Sid Lambert looks back at a hard-fought win over the Cherries, as goals from Zouma and Benrahma earned the Hammers a fifth consecutive home win of the season, moving us up to 10th in the table.

Benny a highlight on a difficult night

Last night’s game was difficult viewing and you wouldn’t have blamed Sky viewers for switching over to Coronation Street during another extended injury break. It felt like Bournemouth spent more time horizontal than Hugh Hefner on his birthday, and the constant stoppages made for painful television.

If there was one highlight, in every sense, it was the performance of peroxide-blonde Said Benrahma. The Algerian attacker hasn’t always been a favourite of Mr Moyes. But the manager was effusive in his praise of Benrahma’s performance against the Cherries. Every time he got on the ball there was a quickness and intent to his play that added a different dimension to our attacks. As ever, the final pass wasn’t always the desired one, but his energy gave us a creative edge over the visitors. And his penalty under pressure was dispatched beautifully.

The challenge now is for Benrahma to prove to his manager that he deserves a regular starting berth. The Premier League has a host of games in quick succession in the weeks before the World Cup. There will be plenty of tired minds and tired legs out there. Benrahma’s quick feet – and quick thinking – could be the difference-maker.

Our injury problems at centre back have undoubtedly undermined our start to the season. So, the return to action of Kurt Zouma was a welcome one.

The Frenchman, a sworn enemy of creativity, was back to his belligerent best last night. It would be easy to slip into cliché and praise Zouma’s strength and physicality. But what has really stood out during his tenure in Claret & Blue has been his in-game intelligence. On top form, there are few defenders in the top flight who can match Zouma’s positional sense. Bournemouth enjoyed a controlled period of possession toward the end of the game as they pushed for an unlikely equaliser, but Zouma stood firm.

It was fitting that he marked his 200th Premier League appearance with another rock-solid display and a goal too.

Paq Will Be Welcome Back

West Ham’s ability to break down a low block has long been a cause of concern. Against well-drilled Premier League defences, chances are often few and far between. For some time, we’ve been reliant on moments of individual brilliance from the likes of Jarrod Bowen, Michail Antonio and, latterly, Gianluca Scamacca to fashion something out of nothing.

It’s one of the reasons that the signing of Lucas Paqueta was so celebrated over the summer. He’s the type of player that can find chinks in the armour of even the most stubborn rearguards. Last night’s game – against a Bournemouth side who packed the penalty area like it was rush hour on the M25 – would have been the perfect occasion for Paqueta to show his class. His return can’t come soon enough.

Jamie Carragher made the comment last night that this season’s Premier League feels more congested than ever before – and it’s hard to disagree. There’s often been an assertion in England’s top flight that there are “no easy games”, though anyone that’s played Norwich over the past few seasons will be at pains to disagree. Normally after the 10-game mark, the table starts to take on an ominous feeling, particularly for those in the bottom three. Yet this year, there are plenty of teams who feel like they’re in false positions.

It’s hard to believe that Leicester – with Maddison, Tielemans and Vardy amongst their ranks – will play this badly all season. And Alexander Mitrovic’s reinvention as Alan Shearer’s stunt double surely can’t last forever. At the moment, predicting the final league table feels like an impossible task.

Bournemouth were unbeaten under Gary O’Neil and prepared to scratch and claw for every inch of turf. There might be many more days and night like last night when we’ll have to be patient and grind out a win.

This season feels like three points are more valuable than ever before.