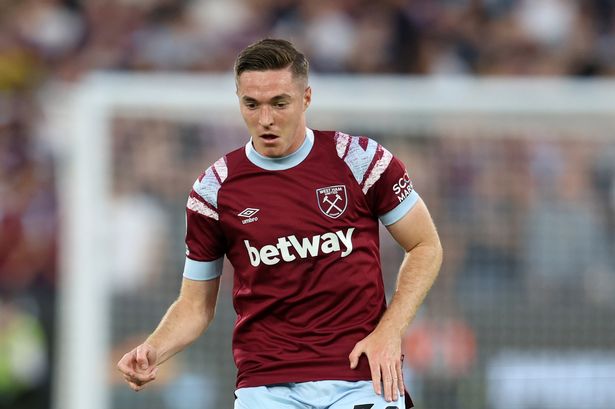 David Moyes has heaped huge praise on a key performer last night as West Ham confirmed top spot in Group B of the Europa Conference League.

It was very much a case of ‘job done’ as Moyes’ Irons made in 5 wins from 5 in the competition this season to guarantee West Ham a spot in the last 16 round which commences next March.

The boss was understandably thrilled with his sides efforts, however he gave special mention to a player who has had to wait patiently for the opportunity to impress, and that he very much did.

Conor Coventry, the captain of the Ireland U21’s side who also recently achieved status as the most capped player for his nation at that level, produced a sublime display in the middle of the park alongside Pablo Fornals.

It was a performance that will have reminded not only the boss, but all associated with the club, what a talent he is, as he looked composed throughout whilst putting in a battling showing when it mattered.

The display certainly didn’t go unnoticed by Moyes, who admitted that Coventrys efforts meant he actually decided to keep him on longer than planned, despite the Irishman picking up a harsh yellow card.

“If Conor had not played as well as he did, the boys would have been on earlier, “stated Moyes to the press after the match. “Conor played that well.

“I could easily have kept him on. I was a bit wary of the booking. I thought the referee was booking quite easily tonight and I was worried anything could slip. And it just made sense at the end of the game to put on another couple of players to see us through till the end.”

The West Ham Ways Dan Woffenden highlighted after the match some of the stats from Coventry’s performance, which again emphasised just how well the Hammers Academy graduate played last night.

We also caught up with ExWHUEmployee to get his thoughts on the display from the Irons midfielder. “Excellent performance and very professional,” stated Ex. “Conor is very much a listener to his coach, and against Viborg which he got unnecessary stick, he was simply following instructions.

“The boss wanted him to keep it simple and hold possession, which he did very well. This was another solid display from him.”