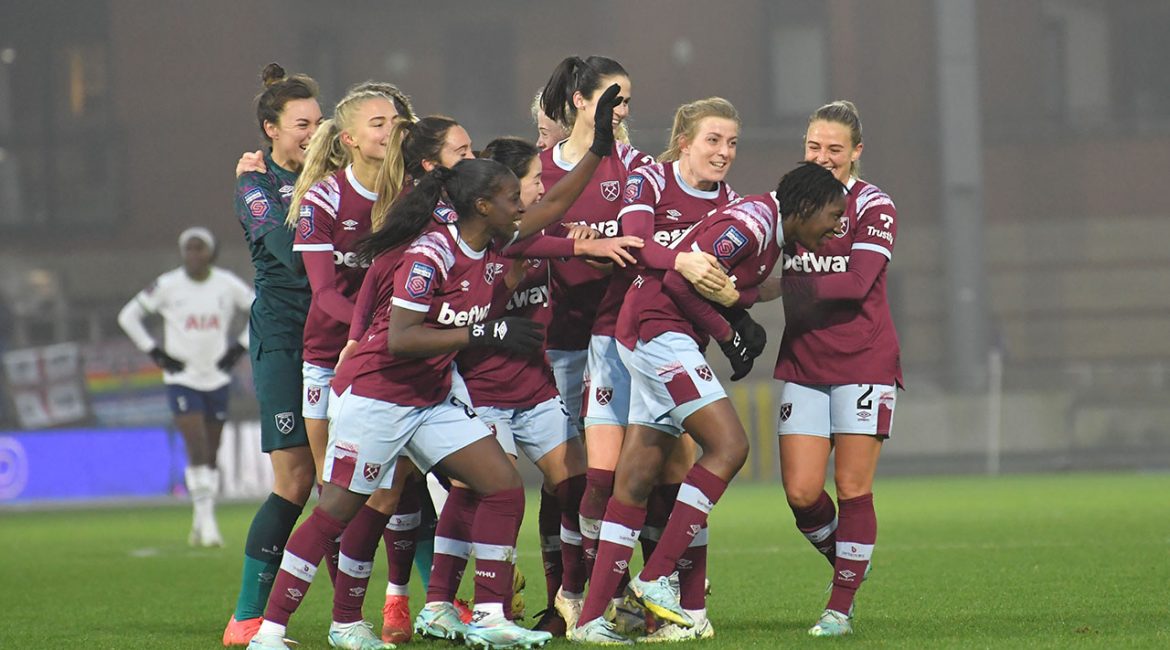 Sid Lambert looks back on a sensational Sunday afternoon at Brisbane Road, as goals from Dagny Brynjarsdottir and Hawa Cissoko earned Paul Konchesky’s side a win over Spurs in the Women’s Super League. The win lifts West Ham United Women to fifth in the table ahead of the winter break

On an icy-cold afternoon in east London, a familiar chant from the vocal away contingent warmed the heart. Moments earlier Hawa Cissoko had scorched past the terrified Tottenham defence and then produced the coolest of finishes to secure three points and signal wild celebrations in Claret and Blue.

It was a surreal moment. Cissoko had spent the afternoon expertly marshalling the defence alongside Grace Fisk, offering Tottenham’s forwards the same amount of space Jabba the Hutt might find in a phone box.

Then with seven minutes remaining, and the Hammers comfortably holding onto a 1-0 lead, a counter-attack opportunity presented itself. Cissoko ran forward. Then ran some more. By now she was a runaway train, steaming past a stunned Spurs rearguard. In the dugout Paul Konchesky looked panicked. Then confused. Then ultimately beamed a huge sigh of relief, like a man who’d momentarily lost his car keys after a big Sainsbury’s shop.

Perhaps it was written in the stars that Cissoko would be the star on this bitterly cold and gloomy afternoon. The French international was returning to WSL action after her five-game ban for the infamous fisticuffs at Villa Park, and her flawless performance earned her the right to deliver a knockout blow.

It hadn’t been so straightforward in the first half. There was plenty of perspiration from West Ham, but precious little quality. Up front, Claudia Walker and Viviane Asseyi werereduced to chasing lost causes as the midfield struggled to get a grip on proceedings. The home side dominated possession and produced occasional moments of alarm, particularly when they hoisted balls into the box.

Thankfully, the back four stood firm. Fisk and Cissoko, ably assisted by Shimizu and Smith on either flank, threw themselves in the way of danger. And if anything did sneak through their defences, Mackenzie Arnold was in fine form.

Incredibly, the Irons nearly had an undeserved half-time lead. The indefatigable Kate Longhurst forced an error and a rash challenge resulted in a penalty kick. Step forward Dagny Brynjarsdottir. Sadly, much like Harry Kane, she was unusually wayward from the spot. Thankfully, she was able to make amends much sooner than the England captain.

Half-time brought a much-needed change from Konchesky. Evans for Hayashi and a tactical switch. It reaped immediate rewards. Brynjarsdottir showed no ill-effects from the penalty miss, driving home a loose ball to put the Hammers ahead.

From that point on, it was one-way traffic. West Ham warmed to the task, whilst Spurs were cold and clueless. The second goal, when it came, was well-deserved even if it came from an unlikely source. Prior to the game, Cissoko had made over 100 senior career appearances without troubling the scorers.For those of you of a certain vintage, those are Steve Potts numbers. And as the French centre-half stormed forward, the most likely recipient of the ball seemed to be the Leyton skyline. Yet at the crucial moment she produced the sort ofdelicate finish that made you wonder if she’d signed Lionel Messi’s shooting boots on a temporary loan. It was a marvellous end to a marvellous afternoon.

West Ham are sitting fifth in the WSL. And they deserve it.