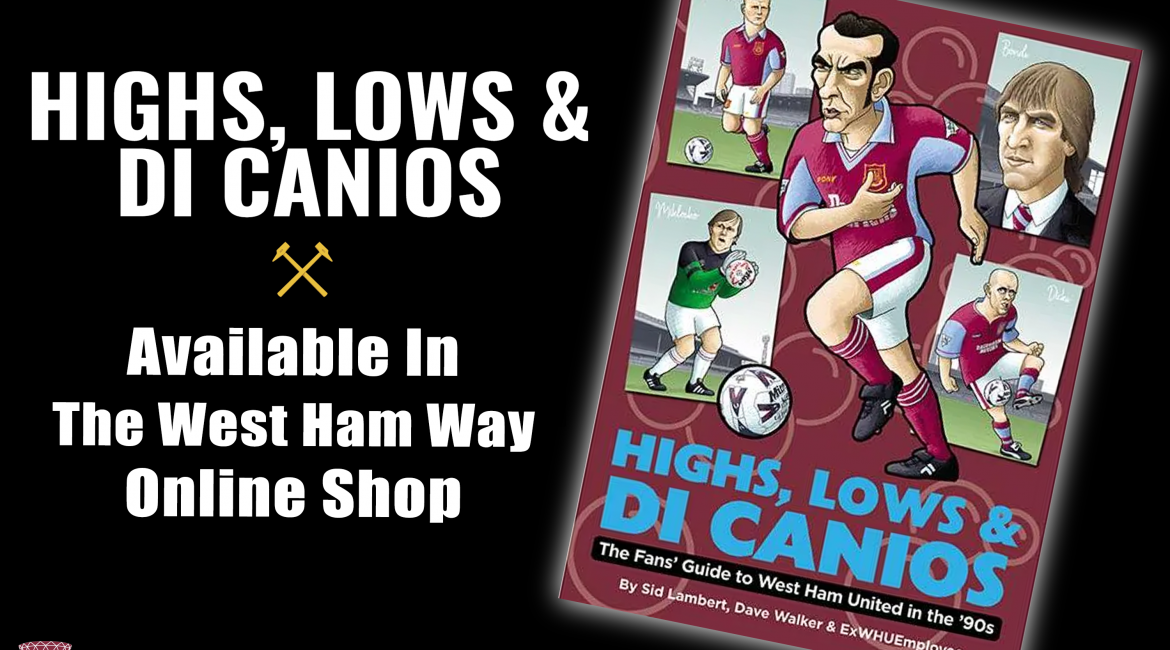 If you want to purchase the new book ‘Highs, Lows & Di Canios’ in time for Christmas then this Friday is the deadline.

We are still taking Christmas orders of our book “Highs, Lows and Di Canios: The Fans’ Guide to West Ham United in the ‘90s”. We’ll be doing the final courier drop on Friday to guarantee delivery for the festive season. You can place your order on our online shop.

The book is a rollercoaster ride through one of the most turbulent decades in Claret & Blue history. And to give you an idea of what it’s all about, here’s the foreword by Hammers legend Julian Dicks…

”I miss Upton Park. What a place to play football. I’d heard the old saying about “playing under the lights”, but it was only when I put on that Claret and Blue shirt and walked out of that tunnel – into the full glare of the floodlights – that I appreciated how glorious it was.

”Even after all this time, I can still remember it so clearly. The sounds, the smells, the sheer electricity in the air. It was so special.

”When I first signed for West Ham all I knew about was John Lyall and Billy Bonds. Billy was a player I really admired. I loved his never-say-die attitude. That was exactly my style of football. I rolled up my sleeves and gave it everything I had, every single week. I cared about losing, I cared about wearing the shirt. And this created an amazing relationship with you, the West Ham fans. For 11 years, over two spells at the club, you were a huge part of my life.

”The 90s was an incredible time to be at this football club. When I got the chance to come back in 1994, it was the easiest decision I ever made. It gave me some memories that I’ll treasure forever. I hope you enjoy reliving some of those moments in this book.

”Sid, Dave and Ex have told the story from a supporter’s perspective, which is really important. Because that’s what a football club is. It’s not a brand. It’s not a badge. It’s not the players or the manager. It’s the people. That’s what makes West Ham so special. Enjoy.”