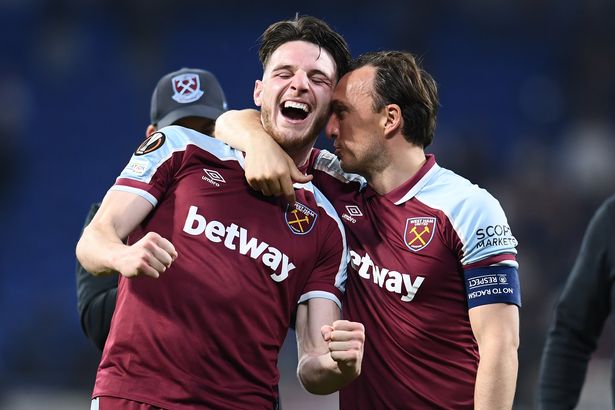 The club legend, who retired from playing at the end of last season, handed over the armband to his protege and close friend Rice, admits that the England midfielder showed all the attributes to becoming a leader in the claret & blue from a young age.

“If there was one person who was going to captain West Ham after me,” Noble told Chris Kamara and Ben Shepherd on BBC Sounds, “it was Declan.”

“I see him as a brother. He’s such a good person and player. Maybe even better person than player which is saying something!”

Noble, who commences his role as West Hams new Sporting Director officially on January 1st, also stated that being captain of the club he adores has not been easy, and reflected on the pressures that come with the position.

“I really struggled with the mental side of the game,” admitted the former number 16. “It was hard. Everywhere I’d go I’d be talking about West Ham. The garage down the road, to watch my son play… everywhere I’d go it was all of the time.

“I felt under pressure when we weren’t doing well and I struggled with it. Because I wanted West Ham to do well so badly, it affected my performances.”

Noble though admitted that Rice has the mental strength to cope with the role and stated that it was apparent very early on that he has that side of the game very much under control.

“Declan coped with that side of things very early doors and I could see it. I honestly believe he is only going to get better.”

Rice is expected to lead our Hammers out on Boxing Day to face current Premier League leaders Arsenal in what is a crucial match as West Ham look to get our season back on track following an underwhelming campaign thus far.

ExWHUEmployee will be providing fans with up to date news on the lead up to the match on Patreon with also January transfer window movements.